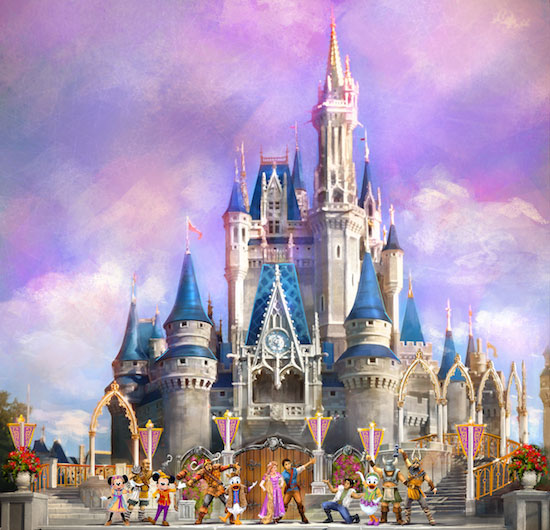 Now that the Cinderella Forecourt has been through a refurbishment, Disney is ready to announce what’s coming next for the park’s center stage – a brand new show called “Mickey’s Royal Friendship Faire.” The new show will feature Mickey Mouse and his friends as they welcome favorite characters from some of Disney’s newest classics including “The Princes and the Frog,” “Tangled,” and “Frozen.”

In “Mickey’s Royal Friendship Faire,” Mickey and his troupe of Merry Makers have been preparing to host a joyous festival and have ventured far and wide to invite friends from other lands to join their celebration. From the Land of the Bewitching Bayous, Goofy has invited Tiana, Naveen and Louis to add a little spice of New Orleans jazz to the party. From the Land of the Enchanted Woods, Donald Duck brings some new friends he met at the Snuggly Duckling, and Daisy introduces us to her special guests, Rapunzel and Flynn Rider. Finally, Mickey shares a surprise with Minnie, as he has traveled to the Land of the Mystic Mountains to invite Olaf, Anna and Elsa, who contributes a blast of her icy magic. It all culminates in a grand dance, as the Merry Makers invite all their special guests to join in the fun on this special day in Magic Kingdom Park

Part of me is disturbed that Disney is only focusing on the newer movies and giving short shrift to the classics. But this is not really much different from the days in the past when whatever the latest movie was had a featured float in the parades. Cinderella, Sleeping Beauty, and Snow White are still elsewhere in the park, they’re just not part of the featured show.

Part of me wonders what sort of feedback or survey results Disney saw that caused it to think there is a demand for a stage show with the newest characters? They’re already featured in the main parade and have meet and greets through-out the park. Still Disney thinks guests want more? I guess they do.

This, alas, means that “Dream along with Mickey” will see its end. The show has been running in its current form since 2006. Prior to that was the somewhat awkward and short-lived Cinderellabration.

Look for “Mickey’s Royal Friendship Faire,” to bring its merriment to life beginning this summer. Are you looking forward to seeing new characters or do you think Disney should still feature the classics?