It’s time to pick a team. Are you Team Cap or Team Iron Man? A new trailer for Marvel’s “Captain America: Civil War” debuted just prior to the Super Bowl and fans are being asked to choose sides in this super fight.

The world inhabited by our superheros changed greatly after the events of “Avengers: Age of Ultron.” However, political pressure mounts to install a system of accountability, headed by a governing body to oversee and direct the team. Oddly Tony Stark takes the side of governmental accountability while Steve Rogers wants more independence for super heroes. This shatters the status quo and fractures the Avengers, resulting in two camps.

As the trailer says, united we stand, divided we fall. Looks like our friendly neighborhood Avengers might meet some enemies they just can’t defeat … themselves.

Along with the new trailer Marvel and Twitter are combining forces to release 11 new emojis themed to characters in the movie. Just tweet with a hashtag included in the list and the special themed emoji will appear after that hashtag in your tweet! 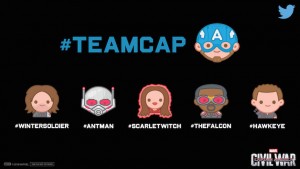 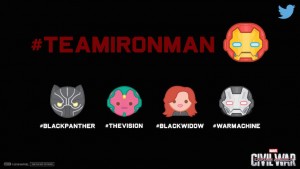 Marvel’s “Captain America: Civil War” finds Steve Rogers leading the newly formed team of Avengers in their continued efforts to safeguard humanity. But after another incident involving the Avengers results in collateral damage, political pressure mounts to install a system of accountability, headed by a governing body to oversee and direct the team. The new status quo fractures the Avengers, resulting in two camps—one led by Steve Rogers and his desire for the Avengers to remain free to defend humanity without government interference, and the other following Tony Stark’s surprising decision to support government oversight and accountability.

Anthony & Joe Russo are directing with Kevin Feige producing. Louis D’Esposito, Alan Fine, Victoria Alonso, Patricia Whitcher, Nate Moore and Stan Lee are the executive producers. The screenplay is by Christopher Markus & Stephen McFeely. Get ready to pick a side and join the nonstop action playing out on two fronts when Marvel’s “Captain America: Civil War” opens in U.S. theaters on May 6, 2016.