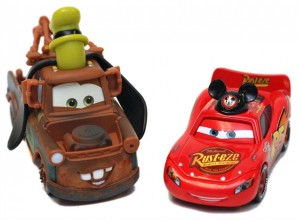 The ‘Cars’ franchise from Pixar has been pretty much a never-ending gold mine of toy sales for The Walt Disney Company. Even the spin-off ‘Planes’ movies that flopped at the box office, did well at Toys R Us. That makes ‘Cars’ an attractive contract for any toy company who signs up to produces all the toys for any future films. However, since the first movie in 2006, it’s been the same company pumping out all the Lightning McQueen and Tow Mater toys you can handle. It looks like that partnership will continue.

Global toy leader Mattel just announced it has renewed its relationship with Disney Consumer Products for the Cars franchise, and the upcoming Pixar film Cars 3. The agreement gives Mattel continued worldwide rights to manufacture, market and distribute toys and products based on the award-winning Cars franchise across multiple categories, including vehicles and playsets.

“We are very pleased that Disney Consumer Products has once again chosen Mattel to help bring its iconic Cars franchise and characters to life for children around the world,” said Christopher Sinclair, chairman and CEO of Mattel. “Disney and Mattel have enjoyed an outstanding partnership for nearly 60 years, and we are thrilled to see the relationship continue in such a meaningful way.” “For almost a decade, Pixar’s Cars has thrilled audiences and connected with families through its story of friendship and the excitement of the open road,” said Leslie Ferraro, co-chair, Disney Consumer Products and Interactive Media, and president, Disney Consumer Products. “We’re delighted to continue working with Mattel on this important franchise. They are the perfect partner to extend Pixar’s storytelling with an innovative and engaging toy line for Cars 3.”

Cars continues to generate strong toy demand globally. Since its blockbuster theatrical release in 2006, Cars and the iconic characters of Radiator Springs have delighted children and inspired imaginative play around the world.

Since 2006, Mattel has shipped millions of Cars toys across a variety of categories, including more than 300 million Cars die-cast vehicles sold. Mattel’s lengthy creative collaboration with Disney*Pixar has also generated hundreds of unique Cars vehicle designs celebrating the individual characters from the franchise.