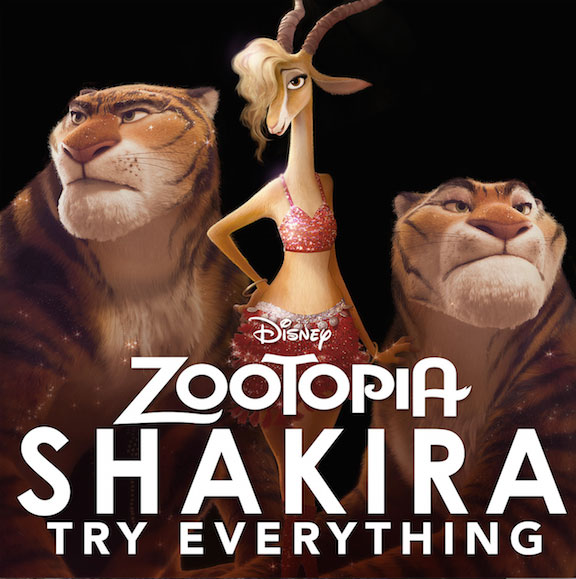 Disney animation’s Zootopia imagines a world where humans never evolved and animals learned to make their own civilization. This week we got our first look at some of the music from the movie.

International superstar Shakira is lending her Grammy-winning voice to Gazelle, the biggest pop star in Zootopia. The all-new original song, “Try Everything,” was written by singer-songwriter Sia and songwriting duo Stargate.

“For the role of Gazelle, Zootopia’s most beloved superstar, there was only one person on our wish list: Shakira. Luckily for us, she said yes. Her immense talent and charm bring Gazelle and her song, ‘Try Everything,’ to life,” said co-director Byron Howard.

“Try Everything” is available for download today on Apple Music and Amazon.

The movie has wrapped and Disney animation is preparing to move on to its next project. Co-director Rich Moore shared this photo from the cast dinner for Zootopia.

Group photo time at the cast dinner for #Zootopia! Words can’t express how much I enjoyed working with each of you. pic.twitter.com/LJzzdXbra9

The modern mammal metropolis of Zootopia is a city like no other. Comprised of habitat neighborhoods like ritzy Sahara Square and frigid Tundratown, it’s a melting pot where animals from every environment live together—a place where no matter what you are, from the biggest elephant to the smallest shrew, you can be anything. But when optimistic Officer Judy Hopps arrives, she discovers that being the first bunny on a police force of big, tough animals isn’t so easy. Determined to prove herself, she jumps at the opportunity to crack a case, even if it means partnering with a fast-talking, scam-artist fox, Nick Wilde, to solve the mystery.