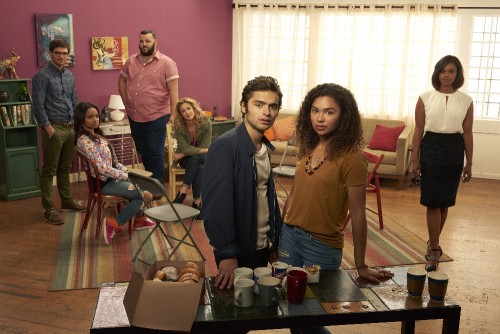 I don’t need another dang show to watch. This “Golden Age of TV” we live in has me watching more hours of television than I see my family. It’s a sacrifice I’ve had to make. Sorry father. Looking just at Monday nights, I watch Crazy Ex-Girlfriend and Jane the Virgin live, then I have Telenovela DVRed. Do I need to add another? Absolutely not, for the sole purpose of my sanity. However, I watched the pilot for Recovery Road on Freeform, premiering the 25th at 9pm EST and it is so good. *slams head in desk knowing there is more to watch*

I have given you some bad advice before, I’ll admit it (Wicked City. LOL.), but y’all have to trust me on this one.

This new hour drama (with a healthy dose of smart, dry humor that I thrive off of) follows Maddie Graham, a 17 year old drug and alcohol addict who is caught in the act when a bottle of vodka is found in her locker and her blood alcohol level is a 0.12. YIKES. After discussions with her school counselor and mother, she is sent to a 24 hour detox and a sober house.

That is where the show hits its stride. A fantastic cast of fun characters, an intriguing premise that takes itself seriously, but never in a corny way, and a wonderful new tone for the network. It’s a show with teens, but it’s not a teen-only show. Think of The Fosters, a show that is very teen heavy, but can be watched and loved by all. I think the dry humor really helps the situation. Maddie and her friend in school have amazing one lines, while the new roommate at the sober house is hilarious.

There is one scene near the end, one you’ll know when you see it, that’s incredibly moving and a very real portrayal of addiction. The show doesn’t take a negative approach on the subject either, it’s uplifting. It doesn’t look down on people who do these things, it looks at them as individuals who can change. I have the feeling this show is going to stick around for a while and save some people itself.

I’d now like to switch gears with this article. Let’s talk about one cast member in particular. Ladies and Gents, this show stars Kyla Freaking Pratt.

“Who’s Kyla Pratt?” you many say, to which I reply “HOW DO YOU NOT KNOW HER?!” As a Disney Channel fan, she was the voice of Penny Proud on the best animated thing Disney has ever done (yeah, them’s fightin’ words), The Proud Family. The girl has incredibly comedic timing and sang in both Disney Channel Star song cover.

For the love of all things right in the world, watch Recovery Road to join Team Kyla Freaking Pratt, because KYLA FREAKING PRATT, YOU GUYS!