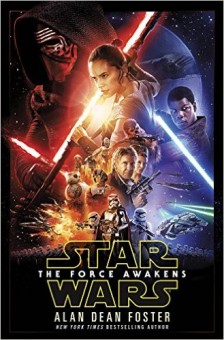 Now that you’ve seen “Star Wars: The Force Awakens” in theaters (you have, haven’t you?), get the official novelization of the movie and dive deeper into the stories of Episode VII.

Written by Alan Dean Foster, who was the ghost writer for the original novelization for the first Star Wars movie and the author of the first non-movie based book “Splinter of the Mind’s Eye,” the novelization retells the story of our favorite characters (like Han Solo, Leia, Chewie) and new favorites (like Rey, Finn, Poe) in their battle of light over dark.

Foster does a good job transferring the plot from screenplay to novel. The action scenes are more fleshed out and he’s able to give the bad guys more dimension that what you see in the film. There are a few scenes not depicted in the movie and some additional dialogue that adds a bit more depth to the story. However, there isn’t the sort of additional story that explains some of the stuff that happens off-screen in the movie.

Other novels in the new Star Wars canon tell the backstory of the movie better than the movie novelization (check out Aftermath).

If you want to feel like you’re back in the world of “Star Wars: The Force Awakens” all over again, the novelization is a great way to do it. You can get it in Kindle or print format via Amazon or add it to your iOS device at Apple.