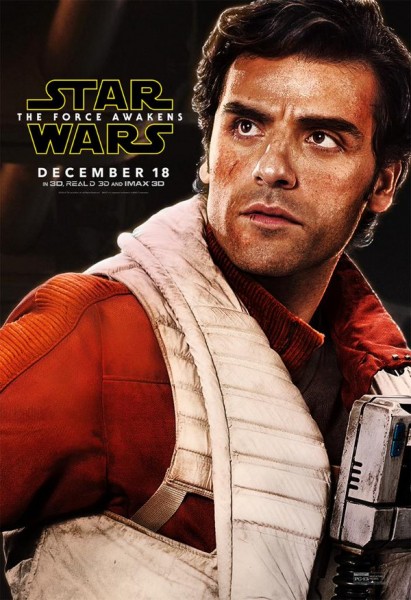 We’re now just 10 days before the first fans get a glimpse at Star Wars: The Force Awakens and the intensity level is picking up from even beyond the highs it had already achieved. A new poster for Poe Dameron, the best x-wing pilot in the galaxy (at least according to Oscar Isaac, who plays Dameron), was just released.

Lucasfilm also shared a short feature on the film that had previously been shown at the Brazil Comic Con). Without revealing anything that hasn’t already been in trailers, we get to see behind the scenes and get a few choices quotes from important players in the production:

Mark Hamill talks a little about the nostalgia he felt during filming, revealing a bit about where Luke is at least one point in the movie:

Obviously you’re seeing him in a very different time in his life. There are lots of surprises in this movie. You’re going to love it.’

It reminded me of when I was in Tunisia on the salt flats. If you could get into your own mind and shut out the crew and look at the horizon, you really felt like you were in a galaxy far, far away. I had that same wave of emotion happen to me when I was on Skellig Michael in Ireland. I wasn’t anticipating it.

In Rolling Stone we get this new picture of Kylo Ren (played by Adam Driver) contemplating the remains of Darth Vader’s helmet.

There’s also a great profile with brief interesting snippets from a lot of players in the film. I liked this description of a battle in the movie from Director J.J. Abrams:

I can confirm that there is a space battle in the film, featuring X-Wings and TIE fighters and something like a Death Star. There is a lightsaber duel, where Kylo Ren is unmasked, revealing an intense-looking, unscarred Driver. There is a weapon that the filmmakers, at least, refer to as a “Sunsucker.” I see a churning energy device on the ground of a planet that sends a massive, lavalike beam upward – Sunsucker or not, it looks scary.

We also learn that both Carrie Fisher and Mark Hamill will be back in Episode VIII (although we don’t know in what capacity). No word from Harrison Ford on if he’s planning to continue in the saga.

Finally, if you haven’t seen it yet. This video is a fun bit with Mark Hamill going undercover on Hollywood Blvd dressed as a Stormtrooper

He should come do that at Disney’s Hollywood Studios, don’t you think?