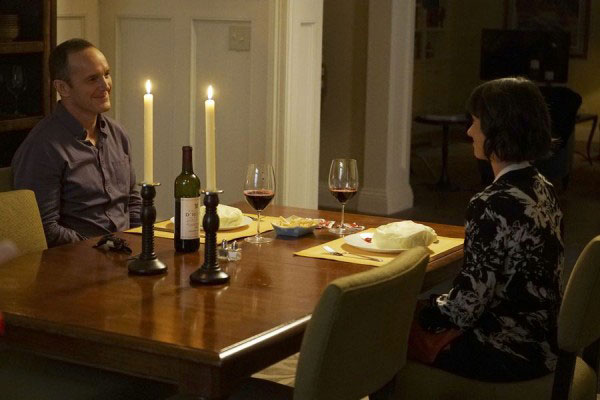 This week’s episode of Marvel’s Agents of S.H.I.E.L.D. started off with a shocker as Coulson and Roz are finally able to have the dinner together that they’ve been hinting at forever. No, that’s not shocking. What’s shocking is when Grant Ward shoots and kills Roz. Coulson escapes but suddenly the mission to take down Ward is personal. Everything now hinges on it.

He takes Hunter and Bobbi with him, leaving Mack in charge instead of May who Coulson believes is emotionally compromised because of Andrew. He sends Fitz-Simmons and Banks, Roz’s right hand man, to infiltrate Malick’s base. Banks ends up being killed and Fitz-Simmons are captured.

When Coulson hears this, his team heads off to find Thomas, Ward’s younger brother. Thomas has been in hiding ever since his brother went off the deep end. After almost killing him in the well when they were kids, Thomas no longer thinks that Ward will protect him.

But Coulson uses Thomas as leverage getting Ward to reveal his location – the castle where the team opened the monolith portal to save Simmons.

Speaking of Simmons, she and Fitz have refused to help Malick and Ward open the portal to retrieve the evil entity. Eventually, Fitz breaks down and agrees to help as long as no one harms Simmons. He, along with Ward and some other Hydra agents will be making a trip through the portal to find the first Inhuman, though Fitz promises Simmons that the only person he’ll be bringing back is Will.

Meanwhile, Mack decides he needs to send in a team to help rescue Fitz-Simmons so he calls in Joey Gutierrez and Lincoln for help giving us our first glimpse at the Secret Warriors that have been teased since this Summer.

Malick opens the portal and the team jumps in. Meanwhile, Coulson and his team are flying just over the castle. On an angry impulse, Coulson jumps out of the plane which is conveniently directly over the room where the portal is which conveniently has a large hole instead of a ceiling.

Coulson makes a dive so precise that it would make any professional diver jealous as he makes it through the portal just before Malick turns it off.

Despite having to actively suspend my disbelief for parts of the episode, it was a good one and with the Winter Finale coming next week and Coulson and Fitz on a distant planet with Ward, Hydra and the evil entity, next week’s episode is sure to be exciting.