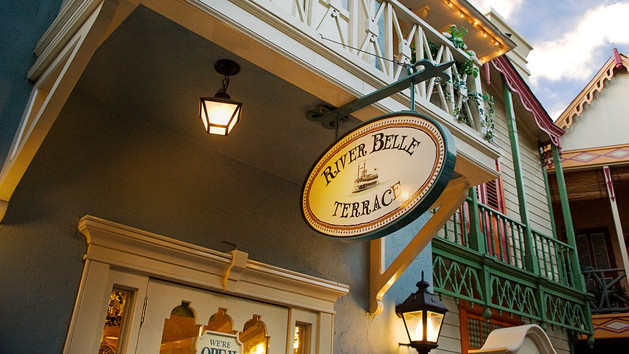 Another chapter in one of the original Disneyland dining locations is about to begin. The River Belle Terrace will stop serving breakfast and instead switch to a table-service location serving lunch and dinner in February. The new menu will include southern staples like barbecue and seafood. Reservations will be accepted for the location.

Somewhere the spirit of Don DeFore is chuckling.

The space that is now River Belle Terrace had a long history in the park. It started out as Casa de Fritos and Aunt Jemima Pancake House. Casa de Fritos moved to make way for Don DeFore’s Silver Banjo Barbecue in 1957 and the two locations were merged in 1961 to allow Disneyland to expand the pancake house. Over time the name changed from Aunt Jemima’s Kitchen, to Magnolia Tree Terrace, and finally River Belle Terrace.

Disneyland guests are demanding more sit down restaurants. At least that’s the message sent by this most recent change. To be fair, I did notice relatively long waits for the sit-down locations when I was at the park. I think it’s also the case that America’s tastes in breakfasts has changed. Rancho del Zocolo will now handle the need for breakfast in the park. It will keep some River Belle favorites, but add some Mexican-inspired favorites.

Over the years it has been a popular tradition among many Disney fans to start their day with a Mickey Mouse pancake and coffee out on the terrace while watching boats float by on the Rivers of American while the park filled up with guests. It will be sad to see that long tradition come to an end. Also coming to an end will be the ‘tradition’ of timing your meal correctly so you can sit outside and see Fantasmic. Maybe they’ll bring back the Egg House in Town Square, which is a good location for the night parade, to compensate?

What do you think of the change? Will you be sad to see breakfast go from the location?