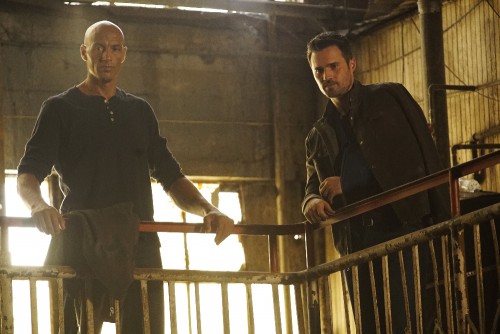 Any worries I had last week of losing momentum by going back to tell Simmon’s story have been thrown out the window because this week’s episode not only picked up where we left off two weeks ago, but kicked it up another level.

Though Andrew has somehow survived the explosion at the store, the team still holds Hunter responsible for him getting hurt. Coulson takes him off the assignment and puts May in charge. May convinces Bobbi that she’s had enough time to heal and is combat ready. The two agents head out to track down Von Strucker thinking that he will lead them to Ward and Hydra.

Daisy and Mack figure out that Lash must getting his intel from inside the ATCU. They decide to tail Banks, Price’s assistant, because they think he might be Lash in human form and Hunter decides to tag a long. Hunter ends ups using an Icer to knock Banks out so that they can get a sample of his blood to check for any Inhuman markers. Turns out, there aren’t any. Banks isn’t an Inhuman and thus, not Lash.

They may not have found Lash, but they do discover that the ATCU is capturing Inhumans and putting them in suspended animation before boxing them up and shelving them in a high-tech version of the warehouse at the end of Raiders of the Lost Ark.

Coulson also sees what the ATCU are doing because he finally convinced Price to give him a tour of their facility. He’s not happy about it either but Price confesses that they are only doing this until they can find a cure for them because she wasn’t able to save her husband, who died of cancer.

Meanwhile, Strucker is on the run from both S.H.I.E.L.D. and Hydra. He turns to one of his father’s old friends, who promptly turns him into Ward.

May and Bobbi finally get to Strucker but not before Ward has found him and left him for dead. As he is dying, Strucker reveals to the ladies that Andrew survived the explosion because he is Lash, at which point, my jaw dropped.

I did not see that one coming. We’ll have to wait until next week to see what happened to May and Andrew while she was on leave but until then, what did you think of the episode.

previous“I Am President!” t-shirt available today only on TeeFury.
nextDisney’s Aladdin as told by Emoji