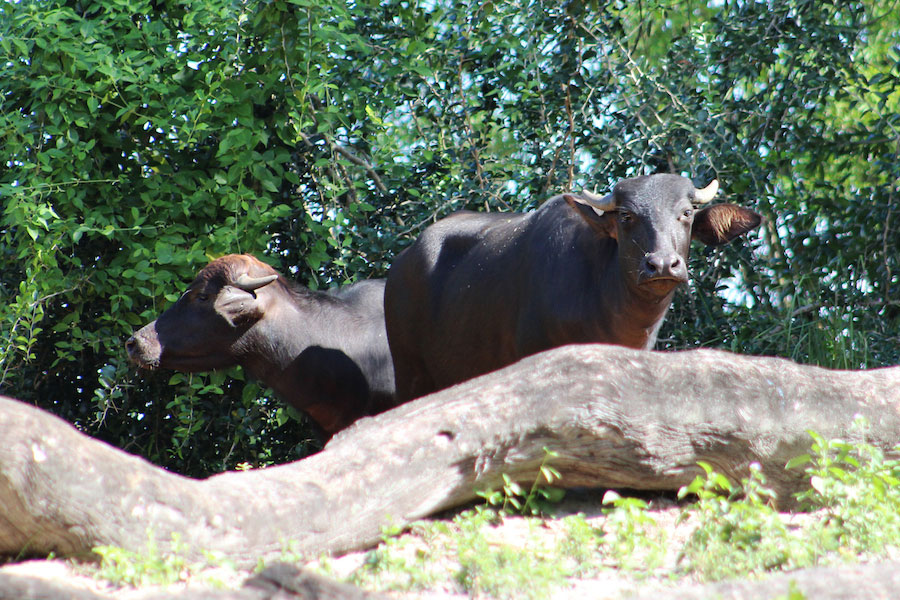 Disney’s Animal Kingdom has recently completed a renovation of a section of the Maharajah Jungle Trek. The grassy fields and brush located across from the tiger enclosure is now home to a trio of water buffalo.

Named after Blanche, Dorothy, and Rose from the popular sit-com “The Golden Girls,” the bovids will share the area with blackbuck, Eld’s deer, Sarus cranes, ruddy shelducks, and bar-headed geese.

The water buffalo is a large bovid originating in South Asia and China. It can weight up to 1,200 lbs and is a herbivore.

Part of the renovation of the space was to provide the water buffalo with access to a water pool. As the name suggests, they need to spend time near water. They have fewer sweat glands than other species, so they need to sit or wade in the water occasionally to help cool down (don’t we all in Central Florida). Like other wild bovids, water buffalo are endanger of losing their natural habitat. Through a combination of domestication, habitat loss, or hunting, the water buffalo population has been cut in half over the past 10 years. Disney’s is doing a great service by helping make the public aware of these beautiful creatures and steps they an take to help conserve their habitat.

The animals who previous occupied this space included some birds and banteng or tembadau (which are also species of wild cattle sometimes domesticated in Southeast Asia) aka Bali cattle. The banteng are no longer at Walt Disney World, but instead are being well-cared for at another facility.

A few more new animals are expected to arrive at Disney’s Animal Kingdom when the night safari’s begin. At that point, you will see most of the same animations, but also hyenas and painted dogs, both new species to the park.

Will you be making a special trip to Disney’s Animal Kingdom to see its newest residents? What do you think of the idea of a night safari?