In “Bridge of Spies,” Steven Spielberg takes us back to a world where truth is stranger than fiction, where the cold war is in full effect, and where insurance lawyers can take on super powers and live. “Spies” is the ‘based on real events’ story of how Russian spy Rudolf Abel and attorney James Donovan’s lives intertwine not once, but twice under extra-ordinary circumstances.

Set in the early tension-filled years of the cold war, we meet Abel a simple painter who is being followed by the FBI. Soon, he is arrested as a spy. Donovan, a respected prosecutor from the human rights violation trials after World War II, is asked to provide a defense for the accused spy. After he agrees, he is drawn into a dangerous web of international politics and must use all his wits to extract himself and two American citizens, one a crashed U-2 spy plane pilot, Francis Gary Powers, the other a US student, Frederic Pryor, in the wrong place at the wrong time, from Soviet control.

The story is part legal drama, part thriller, and part historical epic. Which meant that Steven Spielberg was the perfect director.

“As a youngster growing up in the ‘50s and ‘60s, I had a tremendous amount of awareness of what was happening during the Cold War, but I didn’t know anything about the exchange of Rudolf Abel for Francis Gary Powers,” says Spielberg. “I knew about Powers because growing up everyone had heard that his U-2 spy plane had been shot down and that he had been put on public display at a very public trial, but the story kind of ended with a spectacular shoot down. I didn’t realize that something had happened subsequent to his capture, which was this very back room exchange, this spy swap between Abel, a Soviet spy, and Powers, the American spy pilot. So there was a lot to this story that really pulled me in.” 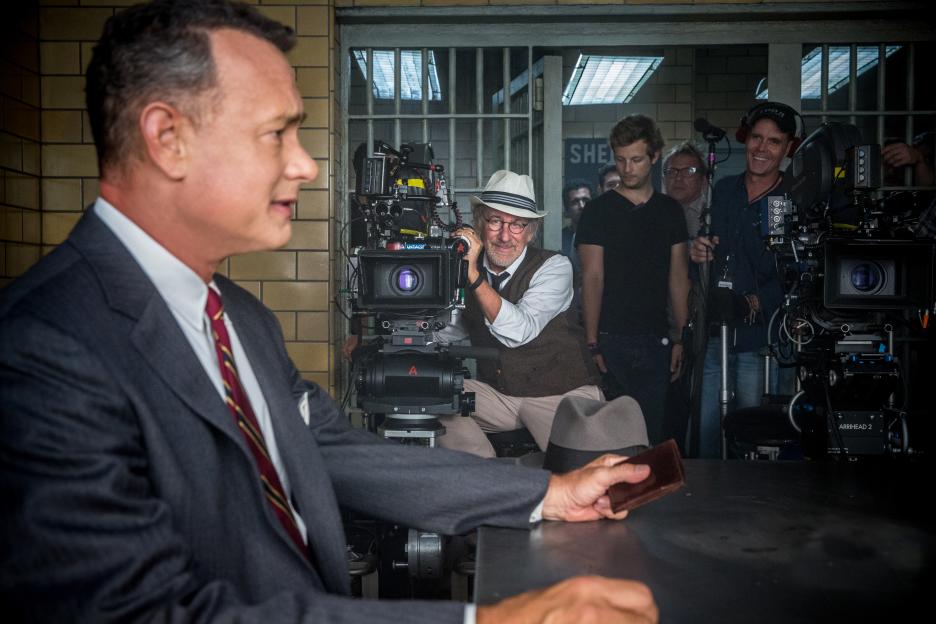 Spielberg was aided with a tremendous story treatment from Mark Charman and screenplay fine-tuning from the Coen Brothers. This helped keep some familiar Spielberg tropes out of the film and gave the actors something to chew on in the dialog. It also added a sense of the absurd that you probably would feel if you were an insurance lawyer thrust upon the global stage not once, but twice.

“Spies” is full of wonderful performances. As you would expect Tom Hanks is perfect in his role. Hanks is Hollywood’s go to stand-up honest man. That mid-western family man research he did for his portrayal of Walt Disney in “Saving Mr. Banks” must have come in handy here too. British actor Mark Rylance finds the perfect affectations for the Russian spy Abel. There were fine performances throughout, but those are the two standouts that you’ll no doubt see nominated come awards season.

Speaking of awards, I would not be surprised to see nominations for Cinematographer Janusz Kaminski and Costume Designer Kasia Walicka Maimone. As a historical drama I was amazed at how well the recreated the feel of 1950s New York and cold war era East Berlin. Kudos to the production team for such an amazing transformation of both real world sets and soundstage recreations. There are so many excellent films in what could be considered Spielberg’s historical oeuvre that it’s hard to know where to place “Bridge of Spies.” Consider “Empire of the Sun,” “Schindler’s List,” “Amistad,” “Saving Private Ryan,” “Munich,” “War Horse,” and “Lincoln” and you’re already in hallowed territory when it comes to movies. In my mind, “Spies” fits somewhere behind “Schindler’s List” and ahead of “Lincoln.” So it’s right up there in the top three.

“Spies” is produced by Dreamworks Pictures and distributed by Touchstone Pictures. Unfortunately this is the last picture in the partnership between Spielberg’s production studio and Disney’s distribution side. I’ll miss having these types of movies in the Mouse House’s repertoire.

“Bridge of Spies” masterfully combines the stories of four different characters — James Donovan, Francis Gary Powers, Rudolf Abel, and Frederic Pryor. All those stories are different but they are seamlessly woven together in the final film. With today’s events beginning to resemble some of those cold war tensions, it becomes all the more compelling to look back at these events that actually happened. In “Spies,” Spielberg has taken one of America’s forgotten heroes and given him the prominence he deserves. The result is a powerful film that will be a big hit with audiences.

“Bridge of Spies” slips into theaters on October 16, 2015. No passport required.