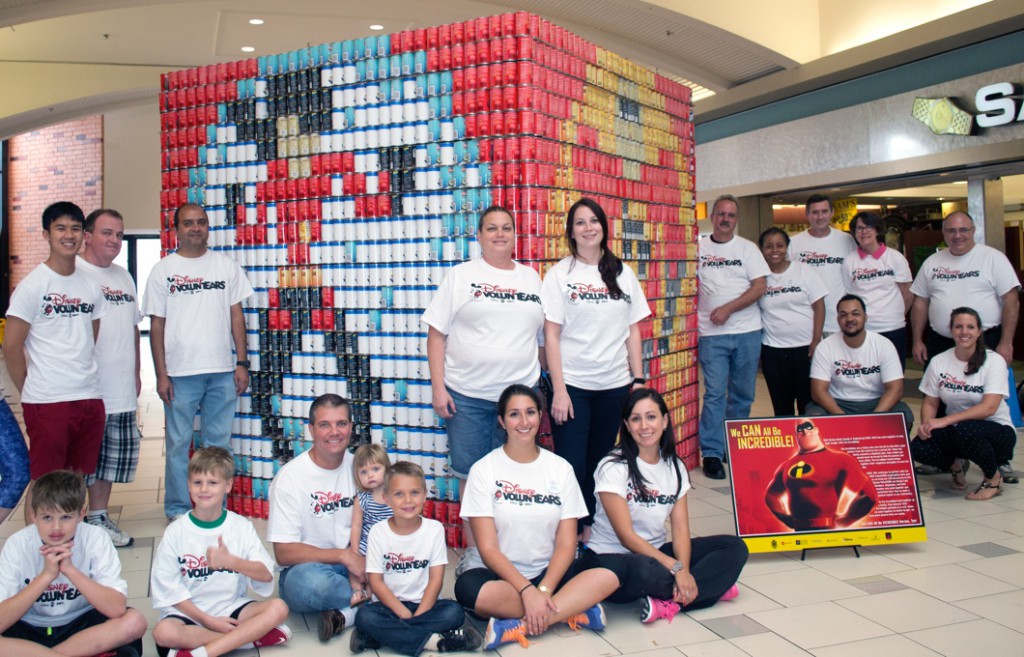 Disney VoluntEARS recently became hunger heroes after entering CANstruction Orlando, an event focused on a good cause feeding the hungry. They spent many hours designing and then stacking layers of 7,500 cans of mixed vegetables, tomato sauce, fruits and other food items to form a super-sized sculpture of the title characters from the Disney-Pixar animated film, “The Incredibles.”

It was all part of an annual design competition, CANstruction Orlando, that benefits Second Harvest Food Bank of Central Florida. Cast Members from Disney Design & Engineering selected the concept for their sculpture based on the theme of this year’s event – “Hunger Heroes.”

“As a family with super human powers, the Incredibles help save the world from the evil super-villain, Syndrome,” said Mike Piatek, director of architecture and facilities engineering for Walt Disney World Resort. “As Disney Cast Members, we may not have actual super powers, but participating in CANstruction is one of the things we can do to help those in need in our community.” Teams representing 14 organizations throughout Central Florida took part in this year’s event. After the competition, all of the nonperishable food is donated to Second Harvest Food Bank of Central Florida.

“Support from the community through events like CANstruction help raise awareness of our mission to create hope and nourish lives through hunger relief,” said Sasha Hausman, development officer with Second Harvest Food Bank of Central Florida. “Combined with the longtime support of Walt Disney World we’re able to multiply our efforts and make an even bigger impact.”

It’s a bird, it’s a plane. No, darling…it’s the Incredibles! Disney VoluntEARS used more than 7,500 cans of food to create a sculpture of the super hero family during this week’s Canstruction Orlando event benefiting Second Harvest Food Bank of Central Florida. http://bit.ly/1MfSwCp

Posted by Walt Disney World in the Community on Thursday, October 8, 2015

Walt Disney World Resort and its Cast Members have supported Second Harvest Food Bank for the past 23 years, including distributing unserved food from around the resort through the Disney Harvest Program. Since 2012, Disney VoluntEARS have donated more than 29,000 food items through the annual CANstruction Orlando events.