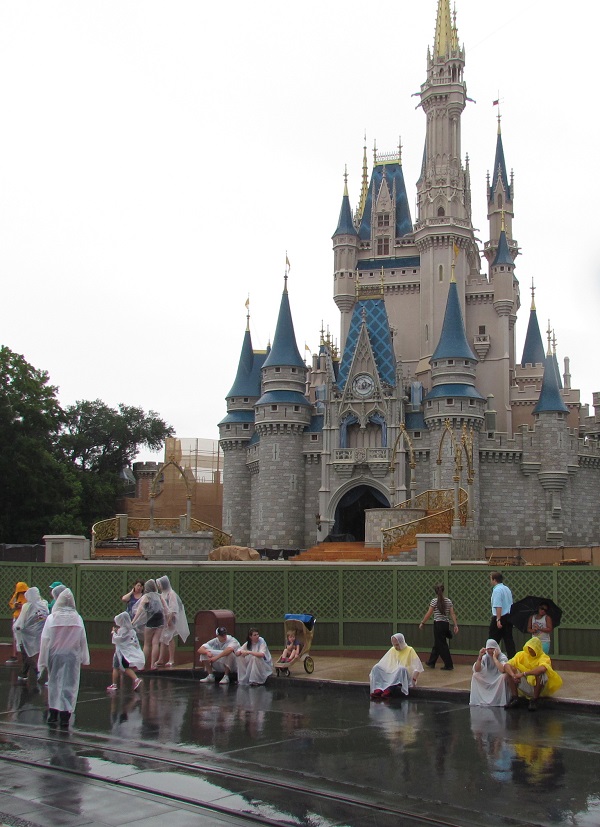 You’ve been planning your Walt Disney World for months, you know where you’re staying, might have a few dining reservations, and have secured fastpass+ for those 2 to 3 big rides you want to hit in each park. It sounds like you’re ready. There is one thing that can throw a wrench into even the best laid plans – the weather.

The weather in Central Florida is unpredictable. It gets even worse in certain times of the year, especially the rainy season of June through October-ish. It’s best to be prepared for the rain and to be flexible regarding the itinerary you’ve planned for each day.

Here are the top 10 tips for maximizing fun on those rainy days at Disney:

1) Invest in a poncho. There are two ways you and do this, either buy a couple dollar store ponchos (each will last you a day or two) or invest in a poncho that is reusable, but collapses to a manageable size for portability. I prefer the well made poncho. One where the neck opening is adjustable and the sides snap firmly together. I carry a gallon ziplock back with me to put what ponchos in after use. If you don’t want to do that, go to any Disney store and ask for a shopping bag to store your wet ponchos in.

2) If you can re-arrange your schedule, try to plan Disney’s Animal Kingdom for a dry day and Magic Kingdom or EPCOT for the rainy day. DAK is meant to be explored. It has some shelters, but is mostly outdoors. Magic Kingdom and EPCOT both have covered queues and a lot of indoor attractions to explore.

3) Plan a break from the parks during the rain. If the rain is scheduled for an early afternoon shower, plan a trip to Downtown Disney or some of Disney’s fun to explore resorts during that time. This tip is especially good during the winter holiday season. Disney decorates their hotels and there is a lot to explore.

4) Take a boat ride. If you’re at Disney’s Hollywood Studios or EPCOT, a slow ride on a friendship boat can be a great way to wait out a passing rain shower. Get off at the Boardwalk and explore the Wyland Art Gallery, which has some great Disney themed artwork, or camp out at ESPN Zone and catch some of the your favorite teams on the field.

5) Take in a movie. Downtown Disney has a large AMC Theatre with 24 screens. Not only does it have two giant screens, it has a Fork & Dine option, which is a great way to take in a movie if you have little ones who don’t like the full dark of a regular theater.

6) Play games. Downtown Disney currently offers Disney Quest, which has a lot of interactive video games, including some that are unique to Walt Disney World. If Bowling or Billiards are more your thing, head next door to Splitsville and reserve a lane or table.

7) If it’s raining late, that doesn’t mean you’ll have to miss the fireworks. Both Wishes and Illuminations will usually still run in a light rain. Heavy wind are a bigger problem and will usually result in a cancellation.

8) Find comfortable footwear. This is an important tip for any Walt Disney World vacation. Each theme park covers hundreds of acres so you’re going to be walking a lot. Find water proof shoes and break them in before you come to Orlando. Flipflops and sandals are probably okay for rainy days. We’ve had some success with Vibram five fingers.

9) Keep an eye on the Radar. Install a weather app on your smart phone (we use Weatherbug) that has a Radar screen that you can set in motion. Ours gives us the last hour or two of radar which lets us have a good idea of how fast the storm cells are moving. Use it enough and you’ll get a good idea of when that rain storm is set to arrive or depart the Disney resort area.

10) Head to the water parks. The rain is a perfect time to splash around in the pool. After all, what’s a little rain when you’re already wet. The water parks will close if lightning is in the area, but they’ll usually stay open if it’s just rain. Water parks will often empty out in the rain, but if you’re willing to stick it out, you’ll get to go on the slides with hardly any wait.

We were recently at the Magic Kingdom on a rainy day and took an opportunity to film a “Kid’s Life at Disney” segment on what to do in the rain.

What are your rainy day tips for getting the most out of your Walt Disney World vacation?