“There’s been an awakening.”

Strap yourself down Star Wars fans. Star Wars has teamed with Instagram to take advantage of their new horizontal video alignment to release a new teaser trailer for Star Wars: The Force Awakens. We’ve seen most of the footage before, but there are two very exciting clips, including one that made me jump out of my seat when I saw it.

There has been an awakening… #StarWars #TheForceAwakens

Yes, that’s Finn (John Boyega) as a Jedi fighting Kylo Ren. At D23 Expo we learned Finn had Luke’s old lightsaber (aka Anakin’s Lightsaber) and now we see him weild it. 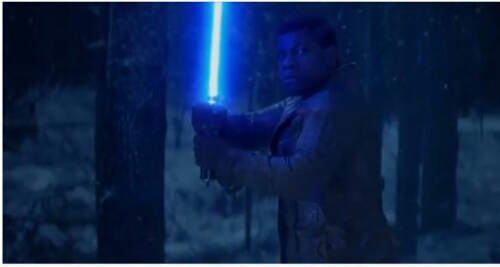 We also see a new clip of Rey (Daisy Ridley) with her BB-8 droid and they’re not on a desert planet. So that’s a change.