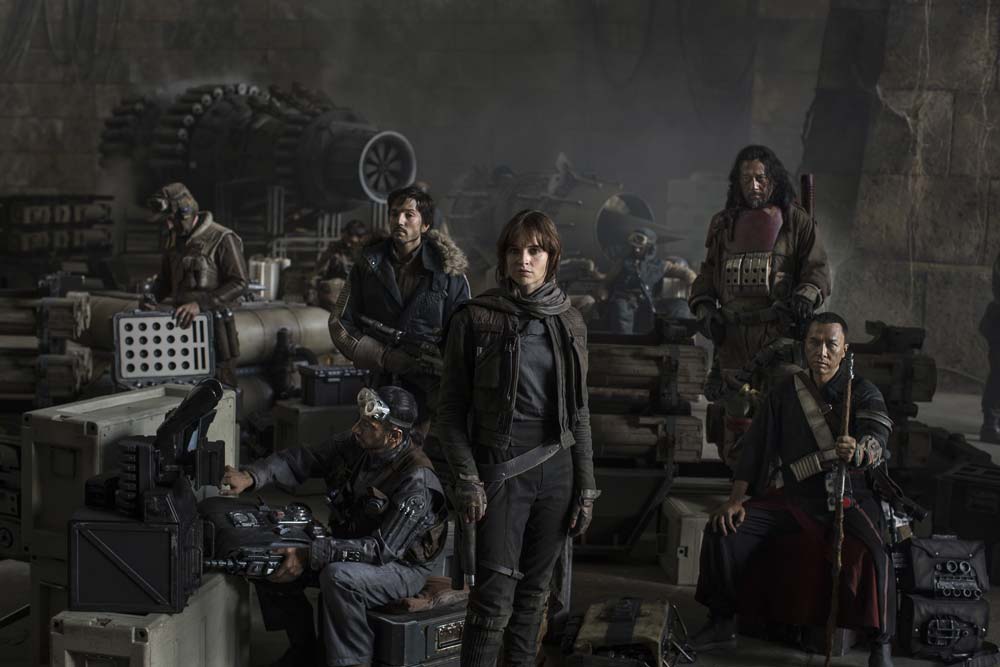 Principal photography has begun on Disney & Lucasfilm’s first film in the new standalone Star Wars stories series (previously the ‘Anthology’ series) — “Rogue One.” Gareth Edwards (“Godzilla,” “Monsters”) is directing “Rogue One,” which tells the story of resistance fighters who have united to steal plans to the dreaded Death Star.

Based on what we can see from the cast photo, if it wasn’t for the vaguely looking Star Wars props strewn around liberally, this could be any group of random fighters united for a cause. Taking a movie like “Force 10 from Navarone” and setting it in the Star Wars universe is not a bad idea. It all comes down to execution. And there’s a lot of pressure on “Rogue One” since it’s the first feature film from that universe that’s not a part of the main trio of trilogies.

“‘Rogue One’ takes place before the events of Star Wars: A New Hope and will be a departure from the saga films but have elements that are familiar to the Star Wars universe,” says Producer Kathleen Kennedy. “It goes into new territory, exploring the galactic struggle from a ground-war perspective while maintaining that essential Star Wars feel that fans have come to know. Gareth is such an innovative director and I’m so excited to be working with him and the extraordinary ensemble cast he’s selected for ‘Rogue One.’”

To make this vision a reality, the filmmakers have assembled a stellar cast, including Felicity Jones, nominated for an Academy Award for her leading role in “The Theory of Everything”; Diego Luna, who was featured in 2008’s Oscar-winning “Milk” and the critically acclaimed “Killing Them Softly”; Ben Mendelsohn, recently nominated for an Emmy for his leading role in “Bloodline” and co-starring in the upcoming “Mississippi Grind”; Donnie Yen, Hong Kong action star and martial artist who starred in “Ip Man” and “Blade II”; Jiang Wen, who co-wrote, produced , directed and starred in the award-winning “Let the Bullets Fly” and “Devils on the Doorstep”; Forest Whitaker, recently featured in the critically-acclaimed Lee Daniels’ “The Butler” and winner of an Academy Award for his leading role in 2006’s “The Last King of Scotland; Mads Mikkelsen, who starred in “The Hunt” and was the memorable villain from 2006’s “Casino Royale”; Alan Tudyk, who plays a performance-capture character in “Rogue One,” stars in the soon-to-be-released “Con Man” series and “Trumbo,” which releases this November; and Riz Ahmed, who was recently featured in “Nightcrawler” and starred in the BAFTA-winning film “Four Lions.”

The film is produced by Kathleen Kennedy and is slated for a December 16, 2016 release.