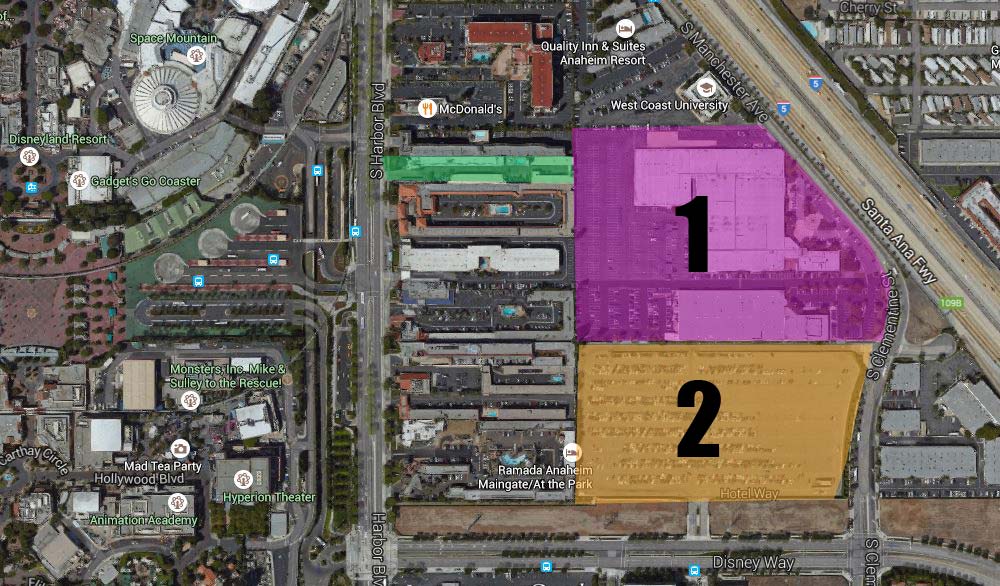 Looking at the area in gold (#2), that is slated to become a parking garage. If you put all three areas together, it would seem obvious to connect areas 1 and 2 to Disneyland via the space currently occupied by the Carousel Inn. Let’s put a pin in this idea for down below.

There is speculation about how much of backstage will be given over to the Star Wars expansion that’s all but officially announced for the park (hello, D23 Expo). Disneyland told the city of Anaheim that it was ready to spend $1 Billion on adding attractions and that second garage we mentioned above. Star Wars and Marvel is rumored to be the bulk of that billion.

Disneyland has reportedly already been working backstage to ready the area that is now the Circle D Ranch, and a few nearby areas that have long been a part of the park potentially converting everything from Big Thunder Ranch back to Disneyland Drive into Star Wars.

In this scenario Marvel would move into the former Innoventions Space and with a new attraction in the Autopia area. What that means for the submarines, I don’t want to speculate.

Who am I kidding, speculation is all the fun. Let’s look at a map of the larger area surrounding Disneyland Resort. 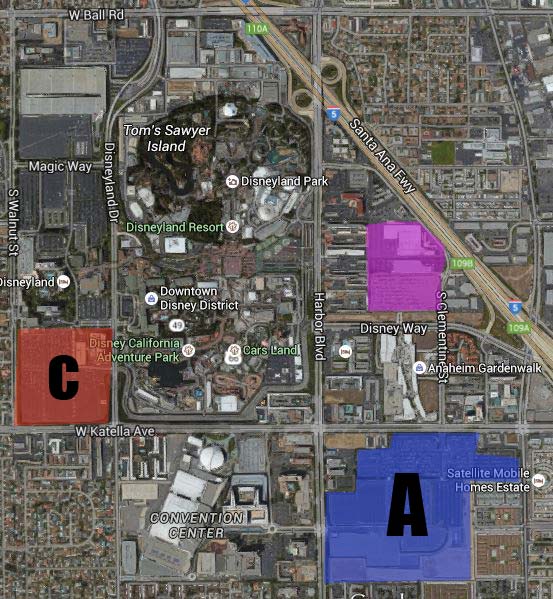 I’m going to armchair Imagineer a bit here. There are a lot of things Disneyland can do if they add a new garage or two (you can take that pin out now). There is the Lion King parking lot behind Paradise Pier Hotel (area C in red). That hotel and the parking lot is ripe for a makeover. Perhaps that long rumored indoor/outdoor (think sliding roof) water park/resort combo. In theory, Disneyland Drive could be reconfigured (in a tunnel) to allow this space to become part of Disney California Adventure too. Only the current location of Paradise Pier hotel has been preventing that. A strategic demolition might be in its future.

Other than a few holdouts the remote parking lots (area A – blue) south of Katella and East of Harbor Blvd, could potentially be converted into a third gate. Anaheim could use eminent domain (or other means of persuasion) to get those properties if they really wanted, as tourism is a primary business for the region. The area is a bit smaller than DCA, but with some crafty vertical construction that wouldn’t be a problem.

What would they put in this third gate? They could give Star Wars the stand-alone theme park it deserves. They could build on the success of Pixar. They could celebrate the power of Super Heroes. There are some infrastructure problems with this scenario (where would the guests park for one), so I don’t think it’s likely.

There is property near the Anaheim Angels stadium that the city could trade Disneyland for. It’s just on the other side of the I4, so not too far away. Plus it’s very near the station for high speed rail that will eventually connect Northern California with Anaheim. Anaheim could use the current parking lots as a much needed expansion for it’s Convention Center. They need to double the square footage if they want to continue to compete with Las Vegas and Orlando for big shows.

This is the scenario I would be pushing for if I were negotiating between Disneyland and the city of Anaheim. Do you think Disneyland could support a third theme park? or would a water park be enough for most guests to add an extra day to their vacation?