Over the weekend, a few readers let me know that the Disney Park Blog has been unavailable almost all weekend. For most of the weekend when you’ve tried to visit the main official blog for updates about Disneyland, Walt Disney World, and Disney Cruise Line, all you’ve seen is this error message. 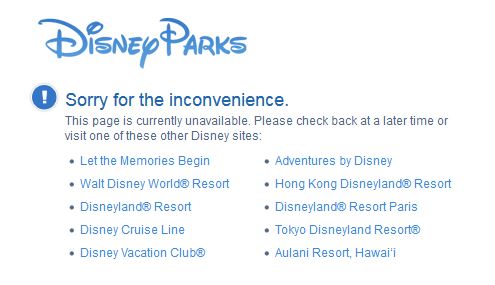 This appears to be an accidental failure as a result of extended maintenance, not a decision to end publishing the blog as links to it still exist in the footer of the main website for Walt Disney World and Disney’s social media accounts continued to post links to the blog even though it wasn’t available.

The Disney Parks Blog was first published in September of 2009 and has become a dependable source of official information for Disney fans.

I’ll update this post with any status changes when I hear of them.