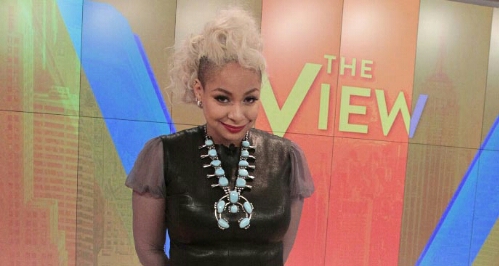 When they bring you onto a show 37 times, you know they like you. That probably explains why ABC’s “The View” just announced that Raven-Symoné will be joining immediately as a new co-host. She will sit alongside moderator Whoopi Goldberg and co-hosts Nicolle Wallace and Rosie Perez on the panel discussion based morning show.

Whoopi had been dropping hints about this for some time. Glad to see it finally is official.

“The Disney Company has made another one of my dreams come true! Being a part of ‘The View’ family will be a wonderful growing experience for me,” said Raven-Symoné. “The cast and crew are warm and welcoming and has made the transition into daytime talk easier. I have a lot to learn within this new arena, but being the apprentice of these spectacular women will only make me a better person and talk show host. I want to thank ABC, ABC News and The Disney Company for believing in me and my potential! Let’s have some fun!”

“Raven is smart, funny and genuine. We’ve loved getting to know her, and we’re all thrilled she’ll be part of ‘The View’ every day,” said Executive Producer Bill Wolff. “She brings a fresh perspective on the hot topics of the day, and she’s a lively, welcome addition to our conversations and interviews.”

“Raven-Symoné is a welcome addition to ‘The View,’” said creator and Executive Producer Barbara Walters. “She is happy, amusing and well informed, and has already brought a unique perspective to the program that has resonated with our audience.”

Raven-Symoné is widely known for her role in the Emmy-nominated comedy series “That’s So Raven” for Disney Channel, which garnered her three NAACP Image Awards for Outstanding Performance in a Youth/Children’s Series/Special, two Nickelodeon Kids Choice Awards for Favorite Television Actress and a Young Artist Award for “Outstanding Young Performer. She was named producer for the series’ fourth season, which aired in 2007.

The popular actress’ recent credits include roles on ABC’s hit comedy “black-ish,” as well as featured roles on “Empire” and the upcoming animated feature film, “Animal Crackers” alongside Ian McKellen, John Krasinksi, Sylvester Stallone and Danny DeVito. Her film credits include “A Girl Like Grace,” “College Road Trip,” “The Princess Diaries 2: Royal Engagement,” “Dr. Dolittle” and “Dr. Dolittle 2.” On television she starred in ABC Family’s “State of Georgia,” the critically-acclaimed series “The Cosby Show,” for which she received the Young Artist Award for Exceptional Performance by a Young Actress Under Nine, and ABC’s “Hangin’ with Mr. Cooper” for four seasons. In 2012, Raven headlined the hit Broadway musical “Sister Act,” produced by Whoopi Goldberg.

She is passionate about issues concerning children and is very active with the Make-A-Wish Foundation and Girls Incorporated, a national nonprofit youth organization dedicated to inspiring all girls to be strong, smart and bold by providing vital educational programs to millions of American girls, particularly those in high-risk, underserved areas.