Festival of Un-Fantasy at the Magic Kingdom 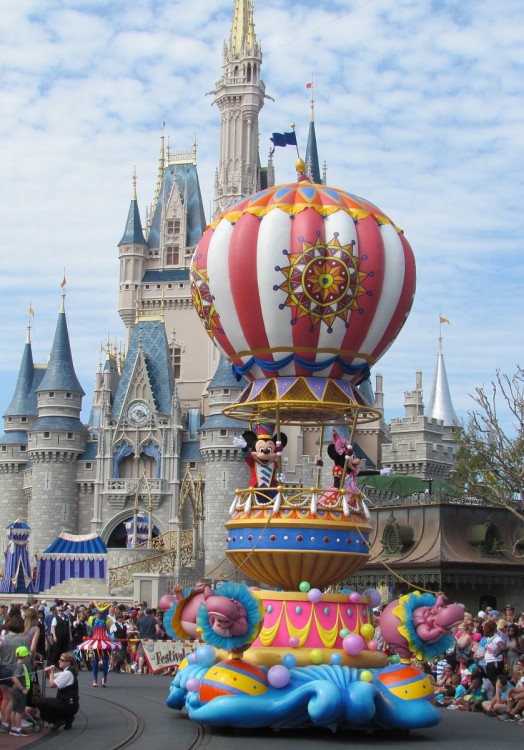 Festival of Fantasy finale balloon float on a better day.

This last Sunday at the Magic Kingdom guests were treated to a special version of the Festival of Fantasy parade. Not only was the music not synchronized with the performances, Maleficent (the steampunk dragon) had her head stuck in one position (meaning no fire effects), Maleficent also got stuck on the parade route right before exiting Town Square. To top if all off, the Mickey and Minnie finale balloon deflated somewhere in Frontierland and the Mickey and Minnie characters had to finish the parade with the balloon draped awkwardly over one side of the float.

The balloon float was part of the unit that was brought over from Tokyo Disneyland. The fans and batteries had to be upgraded to survive the extra long parade route of the Magic Kingdom and have been working marvelously. But that doesn’t explain why the balloon would collapse in Frontierland.

The sound being un-synchronized is also odd. Disney’s parades operate on a zone system when a float moves into a zone, it triggers a new piece of music to play. It’s quite a bit more complicated than that, but it’s also usually adjustable on the fly by sound engineers who are following the parade or located in the master control booth for the park. Not sure what was going on here.

The good news is cast members put on a great show despite all the problems. Sometimes when things go wrong, you do the best you can do to give the guests a good show and push on through.

Thanks to Scott Dadourian for sharing this video with use. (Skip to 9:45 to see the broken Maleficent unit and the finale floats.)

The reality is not every show will go off without a hitch. Ever seen the parade during a rain shower? It’s like the Benny Hill song is playing as the soundtrack. It’s just odd to have so many happen in the same parade. I hope those guests returned to see the parade as it was meant to be.

Also, notice the new red vests on the guest control cast members along the parade route. Apparently, that’s an import from Disneyland that started this weekend. They definitely stand out.

Um, Scott, one request, please tilt that camera 90 degrees so it’s horizontal. Watching a tiny sliver of the parade on vertical axis is majorly annoying. Sincerely, everyone.