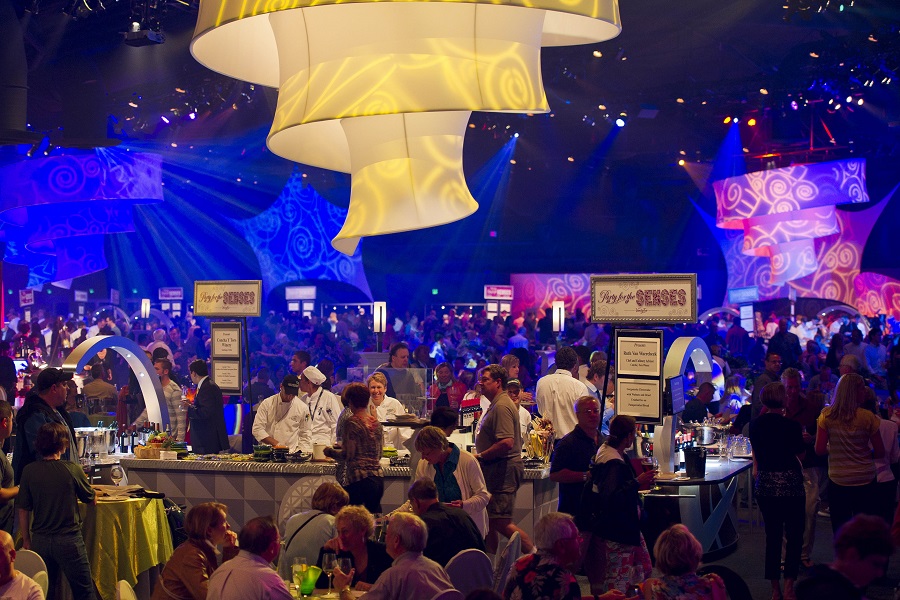 With EPCOT’s spring festival now in the books, it’s time to look forward to a fall festival full of flavor and traditions. This will be the 20th year of the EPCOT International Food & Wine Festival. So be sure to plan at least one visit between Sept. 25-Nov 16.

Disney chefs and festival organizers are promising a feast of surprises to celebrate the 20th annual event in style. New wine tastings, parties and culinary experiences built around the 20-year milestone will bring together loyal festival fans and first-timers. As part of the celebration, Chef Remy of the Disney animated film “Ratatouille” will invite guests to join a culinary scavenger hunt.

Growing in scope each year since 1996 and lauded by the Travel Channel as one of America’s top food festivals, the 53-day Epcot event features inspired bites and sips from around the world at more than 25 outdoor marketplaces, nightly Eat to the Beat concerts of many musical genres, signature dinners and featured tasting events.

This fall, the 20th festival will debut dishes like Pepper Bacon Mac ‘n Cheese at the Farm Fresh Marketplace and refreshing sips like the Scottish Citrus Thistle at the Scotland Marketplace. Culinary icons like Cat Cora, Jamie Deen and John Ash will entertain foodies and inspire their palates at new and returning premium events that include weekly Party for the Senses grand tastings in October.

Festival guests can pair wines and beers with savory and sweet dishes as they stroll the World Showcase Promenade and earn stamps on their complimentary festival passports. Champagne, cocktails and “mocktails” also will bubble up on festival menus. In Future World, the popular Ocean Spray Cranberry Bog returns for a fourth year so that families can discover the cranberry’s rich agricultural heritage and learn fun facts about the tart fruits.

Whether guests’ taste buds prefer savory, spicy, sweet (or all of the above), there are plenty of delectable surprises at every stop along the way. Here’s a sneak peek:

New marketplace menus debut and chefs celebrate festival favorites – Among many dishes set to debut are Seared Venison Loin with Wild Mushroom Ragout and Kumara Dumpling at the New Zealand Marketplace and Grilled Sweet and Spicy Bush Berry Shrimp with Pineapple, Peppers, Onions and Snap Peas at the Australia Marketplace. For many, there’s nothing like a yearly dip into classic favorites like the Canadian Cheddar Cheese Soup.

Festival Center gets cookin’ – Guests can join culinary demonstrations, beverage seminars and mixology seminars daily for a nominal fee. More festival fun will include the complimentary Back to Basics weekend series featuring epicurean tips and tricks from the pros.

Chase Lounge offers perks – Anyone who owns or wants to own a Chase debit or credit card will find complimentary refreshments and interactive fun at the Chase Lounge at American Adventure.

All involved, there will be more than 270 chefs including Disney chefs and culinary stars from across the country. You won’t want to miss the Party for the Senses grand tasting events every Saturday in October showcasing tempting bites from eminent chefs, more than 50 wines and beers and live entertainment. I’m also excited to taste new marketplace items and see how Remy fits into everything. 2015 EPCOT International Food & Wine Festival is going to be great. Will I see you there?