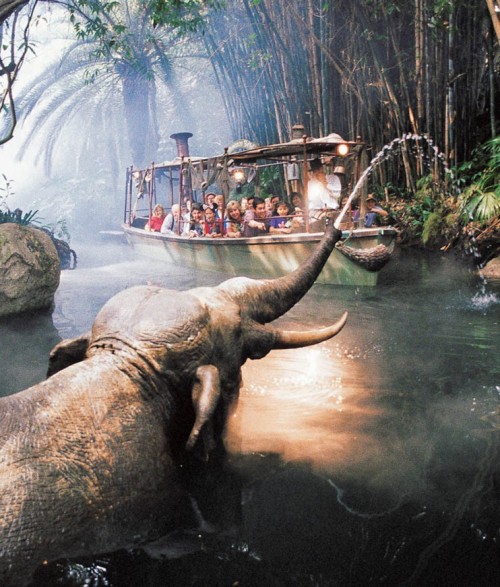 Just a few days ago, I was recounting the wonderful walking tour of Disneyland’s Dark Water system that Disney fan BBS owner John Clark used to offer (back when Disneyland security didn’t mind if you took a small group on a personal tour through the park) and marveling how the Dark Water system had been set up so early in the park to recycle water.

Dark Water, is the water that Disney dyes so you can’t see that bottom body of water your traveling over. It’s composed primarily of the Castle Moat, the “Motor boat” pond, Jungle Cruise, Rivers of America, and Storybook Land Canal Boats. It effectively forms a big river around most of the park. You used to be able to see more of it, but overtime it has been paved over, redirected, and channeled backstage. But that’s okay, you can actually smell your way around the park by following that unique dark water smell.

About the same time I was remembering the dark water tour, The New York times was running a piece on how California Tourism is dealing with the drought. Of course, Disneyland is top of the list.

Turns out, Disneyland is doing pretty well, mostly because Walt Disney was an early innovator when it comes to water conservation. For instance, two-thirds of Disneyland’s original storm drains flow into the system meaning it refills itself instead of using public water.

Since those early days, Disneyland has continued its water conservation efforts:

The 60,000 lawn and garden sprinklers are managed by a weather-based irrigation system, and the park is outfitted, as well, with flow sensors and cutoff valves to detect leaks. And, she said, Disney California Adventure incorporates water conservation design, such as storm water treatment devices which allow for water infiltration into groundwater.

Disneyland has actually managed to reduce its water use while still increasing attendance, operating hours, and also growing the resort. Disney also has a deal with the Orange County Water District to use recycled water to replenish the dark water (and submarine lagoon system) system when needed.

They’ve also been careful with creating landscapes that practice water conservation techniques. Drought-tolerant plants can be found throughout the Disneyland Resort and make up a vast majority of the landscape in several lands and attractions, including Cars Land, Frontierland, Autopia and Big Thunder Mountain Railroad.

Of course, the city of Anaheim must still reduce water usage, and Disneyland is part of that plan. Disney officials say they’ve always complied with any water use plans and expect that to continue once they know what the new restrictions are.

There is definitely room for improvement with tweaks here and there around the resort (water faucet sensors that shut off more quickly after use, more xeriscape around the resort, etc.). And guests can play a part as well by doing things like reusing towels in their hotel rooms, taking shorter showers, etc.

How far do you think Disneyland will have to go to comply with new drought restrictions? Would you be okay if the park decided to turn off some water features (such as the Matterhorn waterfalls) to meet new restrictions?

1 thought on “How the California drought is affecting Disneyland”