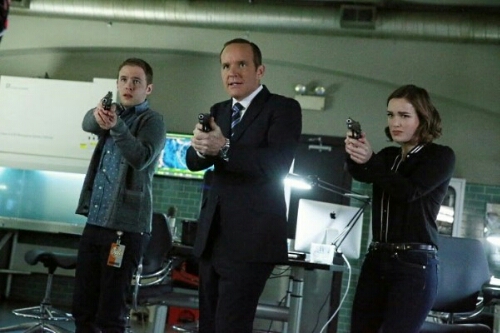 This week’s finale starts right where last week’s episode left off, with Jiaying declaring war on S.H.I.E.L.D. Agent Weaver wants to immediately fight back but Coulson smells something fishy and wants to understand it first.

Skye goes to Raina for answers and Raina tells her that Jiaying is lying and that Skye will be the true leader of the Inhumans. Skye, of course, doesn’t believe her until Raina goes to confront Jiaying. Jiaying kills Raina and Skye catches her

Back at the playground, Fitz and Hunter figure out that Kara has taken Bobbi and Hunter and May go after them. Meanwhile, Ward and Kara have Bobbi tied up and are trying to torture her into admitting that she willing let Kara be captured and brainwashed by Hydra. Bobbi breaks free but gets recaptured. Kara realizes that Bobbi is not afraid of dying which is unsatisfying to Kara. Ward and Kara decide to set a trap for Bobbi’s rescuers. The moment someone opens the door to her prison will be shot.

Cal has been taken back to the Playground and has taken the concoction that he’s created to give him Inhuman strength, but there’s something missing in the formula that’s keeping it from working. Turns out it’s adrenaline, which Simmons gives him after he passes out. Mr. Hyde trashes the Playground until Coulson crashes into him with his car. Coulson is able to convince him that he’s being played by Jiaying and that she is the real monster.

Speaking of Jiaying, she, Gordon and a few other Inhumans have made their way onto the carrier and have taken over. They have place Terrigen crystals near the ventilation system so that everyone will be affected, either they will die or become Inhumans themselves. Jiaying has also sent out an S.O.S. bringing in every S.H.I.E.L.D. faction around.

Coulson is able to call it off at the last minute so that he and his team are the only ones going in.

May and Hunter are still searching for Bobbi. Ward is searching for May to exact his own revenge. He finds her and kills her quickly, but realizes that it was Kara in disquise. Hunter opens the door where Bobbi is but she leans into the line of fire allowing herself to get shot instead of him.

Fitz creates a device that will keep Gordon from using his teleportation powers, allowing him, Mack (who came back after he heard that Gonzales was killed) and Coulson a fair fight. Gordon grabs a crystal and throws it in the air.  If it hits the ground and breaks, all three agents will die. Instead, Coulson catches it and his hand begins to petrify. Mack quickly cuts off Coulson’s hand before it spreads. Yep, you read that correctly. The former director had one eye. The current director has one arm.

Cal kills Jiaying and Skye knocks a Quinjet full of Terrigen crystals into the ocean. Hunter and May return with Bobbi who immediately goes into surgery.

The battle is won and our agents emerge victorious, but not without loss.

Now we set up for next season. Cal has been given the T.A.H.I.T.I. treatment. He doesn’t remember his past or his daughter and he’s now opening up a veterinary clinic.

Coulson and Skye are beginning to create a team of powered people.

Mack is staying with S.H.I.E.L.D. and is now in charge of all alien tech.

May is taking some much needed vacation time with Andrew.

And now for the cliffhangers:

Ward is taking over as head of Hydra.

The crystals that ended up in the ocean infected schools of fish that eventually became fish oil pills that are being sold in stores.

And, after Fitz and Simmons finally talk about their feelings and agree to a date, Simmons is swallowed up by the Kree weapon on the cargo ship.

Here’s an interview with Clark Greg about losing his arm and here’s one with Elizabeth Henstridge about her fate as well.

What did you think of the finale? What would you like to see next season?

previousUpdated plot synopsis for Pixar’s The Good Dinosaur
nextWhat do Marvel’s Cinematic Universe and Star Wars Have In Common?