Now that I have sufficiently recovered from watching 11 Marvel movies in a row, let’s talk about the latest one: Avengers: Age of Ultron. 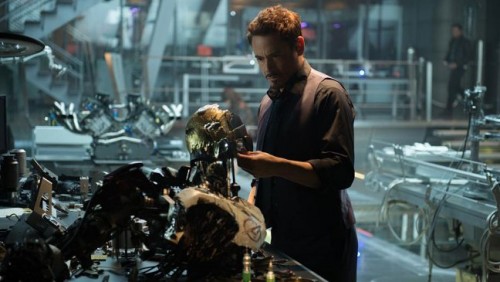 The story is pretty simple. Tony Stark, still reeling from the events of the first Avengers film has decided to partner with his science bro. Bruce Banner to create an army of Iron Man sentries so that they don’t have to do the heavy lifting anymore. In their experimenting they come across a long dormant plan for an artificial intelligence called Ultron. Apparently, they haven’t seen enough science fiction to know that resurrecting this project for the purpose of creating peace is not going to work out so well.

Ultron connects himself to the internet and downloads everything including, apparently, a copy of Pinocchio. I wondered if he was actually going to sing that song from the trailer. The answer is yes. He then recruits Pietrov and Wanda Maximoff, the twins seen at the end of Captain America: Winter Soldier also known as Quicksilver and Scarlet Witch to help him in his quest for peace. They are more than willing to help because they also have a vendetta against Stark (who doesn’t at this point?).

The Avengers first fight with Ultron in Wakanda (home of the Black Panther) and ends with most of them having their minds messed with by Wanda and coming home with their tails between their legs. And by home, I mean, Barton’s home, complete with a wife and kids. Who knew Hawkeye was a family man?

Thor leaves the farm because he needs to better understand the vision Wanda induced in him. (Hint: it has to do with his next movie)

The rest of the team, with the help of the ever-mysterious Nick Fury, discover that Ultron’s goal is to create a human body for himself so the Avengers go off the South Korea to stop him. They succeed at getting the body and take it back to Avengers Tower where Tony decides that he should continue his work with A.I. even though it didn’t work out so great the first time.

The difference this time is that Thor swoops in and charges the body with his lightening and places the stone that was in Loki’s scepter in the body’s head. The A.I. is then implanted with J.A.R.V.I.S.’s program and thus we have the Vision. Thor then tells the Avengers that the stone in his head is one of the Infinity Stones, of which we have now seen four. So, we are now setting up for the next Avengers movie (and probably more of Thor: Ragnarok as well).

The Avengers, now with Quicksilver, Scarlett Witch and Vision in tow, head to Sokovia where Ultron and is continuing to duplicate himself and raise the entire city in order to drop it and create an impact that will destroy most of the life on the planet.

And this is where things got really good, because fighting together as a team is what the Avengers do best. We also see who gets sacrificed because, as Joss Whedon has said, you can’t have a war without casualties. My opinion is that they chose to kill Quicksilver because they didn’t want people to confuse him with the Quicksilver in the latest X-Men movie, but the intended effect was still achieved.

In the end, the entire roster of the Avengers has changed. The Hulk has gone off to who knows where (but not to space like some people are speculating). Tony is stepping away, Barton’s future with the Avengers is unclear and Thor heads back to Asgard to start shooting his next movie.

Steve and Natasha are now heading up the new Avengers facility along with Maria Hill and Nick Fury. Cap and Black Widow are starting with a new batch of heroes: Rhodey a.k.a. War Machine, Sam Wilson a.k.a. the Falcon, Wanda Maximoff and the Vision.

What I find most fascinating about Age of Ultron is that out of all of the movies that they set up for the future (Black Panther, Thor: Ragnarok and Avengers: Infinity War), they didn’t even hint at Captain America: Civil War. Steve and Tony end to movie on good terms with each other. I don’t think this was a bad choice, just an interesting one.

Then, of course, we have the mid-credits scene where we see the Infinity Gauntlet for the first time. We also get another fleeting glance of Thanos. Loki has failed him. Ronan has failed him. Now, Thanos has decided that he’s going to have to collect the gems himself.

What did you think of the movie?

previousLearn to Draw: Goofy
nextOscar Isaac Got Some Great Advice from Harrison Ford on the Star Wars Set