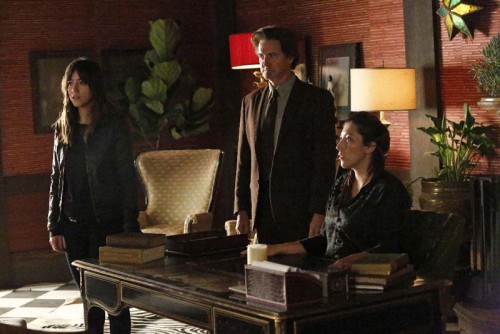 Back in the present, Coulson, Gonzales and their teams barely have time to breathe after the events of the movie because Lincoln has awoken from his injuries and Skye wants to take him back to Afterlife. S.H.I.E.L.D. wants to take this opportunity to make contact with the Inhumans. Coulson also uses this as an opportunity to the two S.H.I.E.L.D. factions, he as director and they as his advisers.

At Afterlife, Raina is using her powers more and more. She tells Gordon of a vision she’s had that Gordon reveals is a Kree weapon that could destroy the Inhumans. Jiaying tells Gordon to find it and he convinces her to let Raina go as well. They end up on Gonzales’ carrier because, as it turns out, the cargo that Gonzales has been hiding is the Kree weapon. Gordon and Raina find it but are quickly caught by the agents and flee just as quickly. 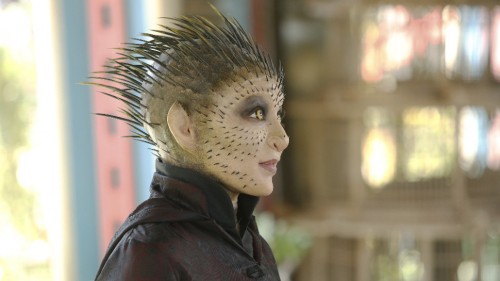 Meanwhile, Cal and Jiaying are having a heart to heart about Raina and S.H.I.E.L.D. Cal reveals more of Raina’s backstory and confesses that, even though he hates Coulson, he knows that Coulson cares for his Daisy. Jiaying agrees to a meeting with Coulson but not before giving Cal a look that says they have something up their sleeve.

Back at the playground, everyone is getting ready to go to Afterlife. Agent May pulls Bobbie aside and tells her that Coulson wants them to head out first to scout out the area. Gonzales convinces Coulson to let him go to Afterlife instead of Coulson. While he and the team head to Afterlife, May and Bobbie are flying elsewhere. May reveals that she is actually Kara who is looking for revenge on Bobbie. Revenge for what, I’m not quite sure. Something about when Bobbie was undercover at Hydra. Maybe Kara feels like Bobbie should have rescued her from being brainwashed. Whatever the reason, she reunites with Ward who knocks out Bobbie. His goal is to give Kara the revenge that she wants.

S.H.I.E.L.D. lands at Afterlife and Gonzales meets with Jiaying while Skye takes Cal back into S.H.I.E.L.D. custody as a sign of good faith. Our first clue that something was wrong is that Cal brought his Mr. Hyde formula with him.

Jiaying, meanwhile, puts her cards on the table. Instead of allowing her people to be put on the Index, she unleashes some Terigen mist, causing Gonzales to go the way of Tripp. Jiaying grabs his gun and shoots herself in the shoulder, runs outside claiming that he shot her and declares war on S.H.I.E.L.D.

Next week, we are going to get a two hour S.H.I.E.L.D.-Inhuman war, with Skye caught in the middle. I am looking forward to the season finale, what about you?