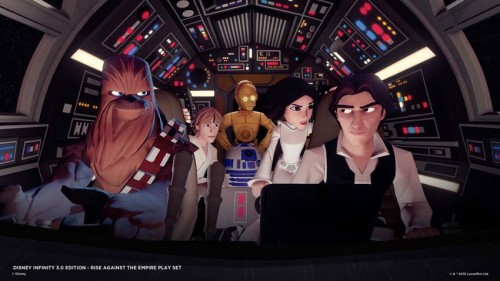 Disney Interactive announced the next installment in its popular Disney Infinity and this time the theme is Star Wars.

When the game hits stores this Fall there will be two Star Wars playsets. The first is called Twilight of the Repubic, which is set during the Clone Wars. It features Anakin Skywalker, Ashoka, Obi Wan Kenobi, Yoda and Darth Maul. The second is called Rise Against the Empire which takes place all throughout the original trilogy. This set features Luke, Leia, Han, Chewy and Darth Vader. They’ve also announced that a third playset with stories from The Force Awakens will be released in the Winter, just before the movie’s release.

They have also brought in more Marvel characters including the Iron Man Hulkbuster suit and Ultron and even hinted at a new Marvel playset. Other Disney characters coming to the game include Sam and Quorra from Tron Legacy, the emotions from Inside Out (with their own playset), Mulan, Olaf and Mickey and Minnie.

They haven’t announced a release date yet, but you can already find places where you can pre-order it for $64.99 which is a lower price than the previous editions of the game.

Check out the game trailer below.

Do you play Disney Infinity? If you don’t does the addition of Star Wars make you want to start?