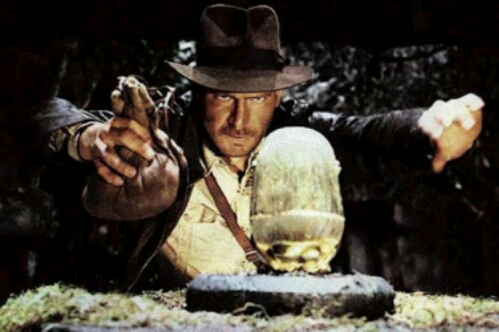 Dust off that fedora, there’s life in the Indiana Jones franchise yet. In between dropping details of future Star Wars films, Lucasfilm President Kathleen Kennedy, let Vanity Fair know that while they haven’t started on writing a script, they are talking about the next film.

This isn’t exactly news, Disney chair Alan Horn made a similar comment last year… but with the second Star Wars Anthology film reportedly pushed back a year or two, a slot might just have opened to get Indy back into action. Just gotta get that script written, a director on board, and a cast hired. No big deal, right?

As far as a director, anybody interested in what Director Joss Whedon could do with the Jones character and the mid-40s milieu? I hear he’s available. How about Brad Bird? I think either would have some interesting things to say about how we got from World War II to where we are now and who were the real heroes who might have been forgotten were it not for Dr. Jones. Like J.J Abrams has done with the new Star Wars film, we need a director who is a student of film and can bring back that look and feel of the first film, while still exciting modern audiences who need a little more than skeletons and spiders to be scared (although snakes and giant rolling boulders will still work).

There remains another big question, is this a sequel or a reboot? If it’s a sequel, Harrison Ford is still around to play Dr. Jones, but is a 70+ year old Dr. Jones someone we want to see on screen? Also, if it’s a sequel can we forget the previous movie ever happened? Please. If it’s a reboot, who should Disney and Lucasfilm cast to play the iconic adventurer? Who would you choose?

What this might mean for Disney’s Hollywood Studios is that the plan to use Echo Lake for Star Wars expansion is off the table. If the Indiana Jones franchise continues to be profitable, then the Indiana Jones stunt show will probably stay, if anything, the Indiana Jones brand should be expanded at Walt Disney World. I’d love to see something added to Magic Kingdom’s Adventureland with our favorite fedora-wearing adventurere featured. How about you?