Marvel’s Agents of S.H.I.E.L.D. recap – The Dirty Half Dozen 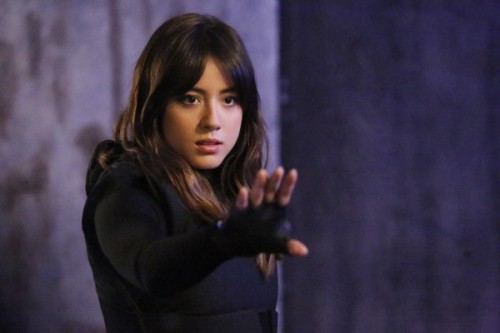 This week’s episode brought together everyone from Coulson’s original team. They have found where List is keeping Lincoln and Mike and set out to rescue them. Coulson is leading the team with May as back up. Ward is there because Bakshi is their inside man and Fitz is there to shut down the defenses at the base.

Simmons convinces Coulson to let her come as a medic since she is familiar with how Mike’s body works, however, she is really hoping for an opportunity to kill Ward with a sleeper bomb that will disintegrate him when he touches it.

Raina has a vision that Skye is the only person who can save Lincoln and Skye uses this to convince Gordon to let her go help the team.

Cal and Jiaying have a long discussion about whether or not it was the right decision to drop him off and leave him in Milwaukee. Their conversation ends with Cal warning his wife about how dangerous Raina is.

Agent 33, Kara, has been taken back into S.H.I.E.L.D. custody and they begin to run tests to see if and how much of her memory can be restored.

And Gonzales continues to not trust anyone and put all of the risk onto Coulson and his team. What a great leader he is.

Even though the bus is cloaked, it is still spotted by List’s men and promptly shot down. The team uses the falling plane debris to hide their descent and entrance into the base. They discover Deathlok has not only lost his eye, but also his leg and Skye rescues Lincoln just as he is about to undergo surgery that will kill him, causing Raina’s premonition to come true.

Meanwhile, Simmons activates one of the bombs and throws it at Ward. However, Bakshi intercepts it and immediately disintegrates. Ward then tells Simmons that she’s changed and that he’s disappointed in her.

After the defenses are lowered and the danger is over, Gonzales brings in his team to destroy the base, but not before Coulson can retrieve some information from List’s computer. He had a secret second mission much like Black Widow did in “Captain America: Winter Soldier.”

Ward escapes but gives Coulson a call telling him to do everything he can to help Kara because she deserves forgiveness. He doesn’t.

Back at the base, Gonzales tells Bobbi that the reason he OK’d the mission is because they now have powered people on their base that they can investigate, which sounds a lot like a variation on what Hydra was doing with them. Coulson finally opens up Fury’s toolbox for Gonzales before revealing to him that Fury is still alive.

He then leaves to answer a call from Maria Hill. They begin discussing the information that Coulson retrieved from the base. List and Strucker have been working to fix Loki’s staff (which was in the post-credits scene of Winter Soldier) and now the Theta Protocol is ready. “It’s time to bring in the Avengers,” says Coulson because, you know, #itsallconnected. In fact, it’s even more connected because Raina gets a vision while talking to Jiaying where she sees machines destroying everything.

Instead of tag at the end of the episode we got to see an exclusive scene from the new movie where we see Hawkeye, Black Widow and Captain America fight one of the Ultrons.

Overall, another good episode, though the connection to the movie seems a little forced. As a fan of the Marvel Cinematic Universe, I enjoyed the nod to the movie, but wasn’t necessary for what’s been going on all season.

We have one more episode next week followed by a 2-hour season finale. What have you thought of Season 2 overall?

Tags:ABCagents of shieldaosmaria hillmarvelmarvel's agents of shieldTelevisiontvultron
previousThe Emotions from Pixar’s Inside Out react to Avengers: Age of Ultron Trailer
nextConstruction update on new Adventureland Restaurant