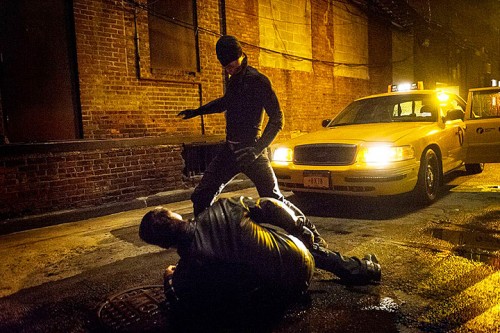 This last Friday, I sat down on my couch after work and got up 13 hours later. My goal was simple, to watch Marvel’s Daredevil as quickly as possible. To describe the show succinctly, it is fantastic.

I truly mean this. Daredevil is not only good but different from anything else Marvel has done since this whole thing started. While it is dark and gritty, it is not brooding and does not dwell on its darkness. Instead we get a show that wonderfully balances humor and mature themes.

Marvel does not shy away from the those themes either. I’ll keep the description to a minimum but there is plenty of bone crunching, blood spattering scenes throughout. However, it doesn’t go overboard. In fact all the injures appear fairly realistic. Marvel doesn’t go out of its way to try and gross out the audience. Instead everything is carefully calculated to to make the fight scenes realistic while still making you cringe.

Besides the fight scenes, the writing and overall story is nearly perfect. My only complaint is that the first 6 or 7 episodes are pretty action heavy. These episodes are then followed by some pretty dialogue heavy episodes. Now I did watch this all in one sitting through the night so my perception may be a little off. Also, while there may have been this off balance, everything was still well done. The performances from everyone were inspired and worked were engaging.

On top of all of this, the show still felt connected to the rest of the universe. Unfortunately there are no surprise cameos however there are plenty of references to the other events and heroes. Most importantly, there were plenty of appearances and hints that some comic book fans will squeal with delight over. 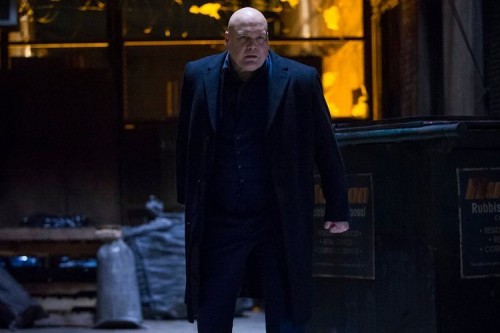 If you’re not familiar with the Daredevil comics from Marvel, don’t worry, it’s not a requirement to watch the series. The basics are simple Matt Murdock (Charlie Cox) is an attorney by day and vigilante by night. He was blinded in an accident as a child, which gave him heightened senses. As Daredevil he uses these to fighting crime in the Hell’s Kitchen neighborhood of New York. His main nemesis is a powerful businessman named Wilson Fisk — aka Kingpin (Vincent D’Onofrio). There is a lot of conflict between being a member of the court during the day and crime fighter at night.

To summarize, Daredevil is dark and gritty without being moody and depressing. It’s grounded in realism where the characters experience both pain and joy relative to the situation. In other words, Daredevil is a fun ride that explores the pain and triumph of being a hero.

My recommendation, call in sick tomorrow.