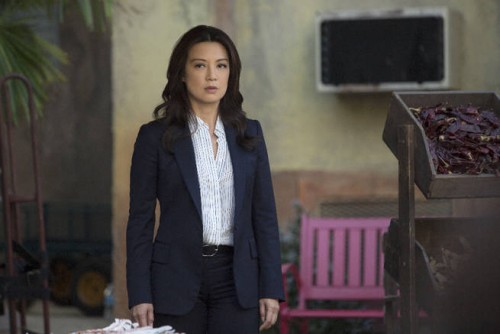 This week we finally get to see why Agent May is called “The Calvary” and what it has to do with the Inhumans. We also get to see what some actual motivation for why Gonzales and his team want Coulson and Fury’s Toolbox (though I still think their methods are not the best way to win friends and influence people).

Skye is still at “Afterlife” and being trained by Jiaying. Eventually, Jiaying reveals that she is Skye’s mom but that they must keep this fact a secret. Why? Well, eight years previously there was a woman who wanted to skip the line for Teregenesis and ended up running away. She ended up in Bahrain. Coulson and May were dispatched to bring the woman in but she takes down their entire team, leaving May to go in on her own. She discovers that her team has been brainwashed by the woman. When she confronts the woman, May discovers that the brainwashing actually came from the woman’s daughter and the only way to stop her is to kill her. After the S.H.I.E.L.D. agents come back to their senses, they believe that May single-handedly took down 30 hostiles, thus nicknaming her “the Calvary.”

Because of the mother-daughter relationship that the woman and girl had, the Inhumans will be hard pressed to trust Skye if they found out the truth about her and Jiaying.

Also in the Afterlife, we see Raina struggling with the fact that she is covered with thorns but with no idea what her power is. Lincoln discovers at the end of the episode that she has the power of precognition.

In the present, Agent Weaver grants May command of the Playground and the team there. May also finds out that Gonzales wants to know about something called the Theta Protocol. We, like May, have no idea what that is, but it seems that Coulson is building a large, secret base for powered people like Deathlok (which is leading some to believe that the seeds are being planted for the Agents of S.H.I.E.L.D. spin-off to be Secret Warriors themed).

May goes back to the Playground to try to convince Simmons to open up the toolbox.

Our pre-credit tag reunites us with Fitz, who has locked himself up in a public bathroom and is attempting to open the Toolbox himself. He succeeds and contacts Coulson and Hunter who then go to rescue him from the people tailing him.

Lots of interesting backstory this week as well as some revelations for the future. What do you think will happen in the next few episodes and how, if at all, will it tie into Avengers: Age of Ultron?