Get Ready for Star Wars Weekends at Disney’s Hollywood Studios launching May 15, 2015 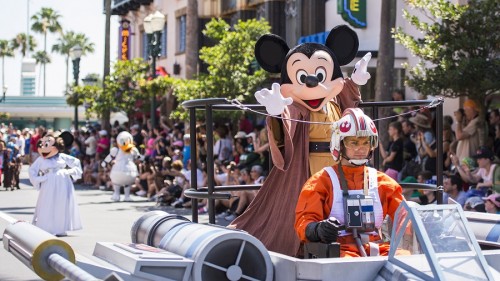 Bringing Walt Disney World Resort guests as close to the Force as they can get, Star Wars Weekends features more than 60 Star Wars characters roaming the theme park for meet-and-greet opportunities, a Star Wars motorcade, the “Symphony in the Stars” nighttime fireworks spectacular saluting iconic sounds of the films, Star Wars-inspired dining offerings and specialty food and beverages, interactive activities, and more every weekend (Friday, Saturday and Sunday) May 15-June 14, 2015.

Highlighting the event, Star Wars celebrities, including returning favorites and event newcomers, will appear in star conversations, talk shows, autograph sessions, and the motorcades each weekend. Don’t miss the schedule of who is appearing which weekend.

The host of Star Wars Weekends, actor James Arnold Taylor, from Star Wars: The Clone Wars and “Star Wars Rebels,” will also host the new Star Wars Weekends show “Star Wars: Rebels,” where guests can relive the twists and turns of the first season of the Disney XD series with special guests from the show’s voice cast. In addition to Ashley Eckstein’s Weekend IV guest spot, she will also be joining every day of the event as host of “Padawan Mind Challenge – Family Edition.”

Of course, there’s also the merchandise. Darth’s Mall will be full of a galactic assortment of collectibles and commemorative items. It’s located near the Streets of America this year, so don’t head down to Tower of Terror accidentally. Three items sure to be in demand this year are the Star Wars D-Tech Me Experience figures, Star Wars themed MagicBands, and the Aurebesh name tags. Plus Her Universe will be back with a great selection of apparel for the female fan.

What do you look forward to the most when attending Star Wars Weekends?