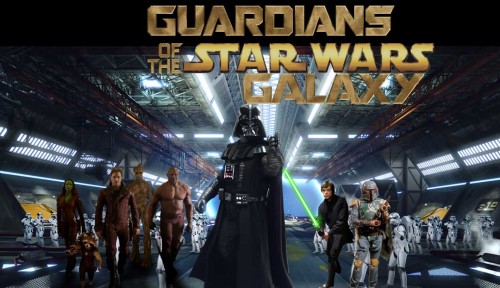 A Star Wars/Marvel Crossover has just been announced at Walt Disney Studios! It was really only a matter of time before we heard about this announcement. Both are hugely popular franchises that have a strong space element.

How exactly will they interact? Details are still light years way but it seems that our favorite anti-heroes from Guardians of the Galaxy will be having a run in with dark force from a galaxy far, far away.

In a surprising twist, instead of interacting with the new Star Wars cast, the Guardians will be visiting the old crew. Frankly, this is exciting. We have the opportunity to see Chewbacca and Groot get into a shouting match, Rocket Raccoon dismantling our favorite droids, and Star Lord and Han Solo trading witty banter like no tomorrow.

How would this even be possible? My guess is the Time Infinity gem. Since Star Wars does take place a long time ago, its the only plausible explanation. Add in some new age trickery to make the Star Wars cast look young, think Jeff Bridges in Tron: Legacy, and you have yourself a plan to make all the money.

Guardians of the Star Wars Galaxy premiere is currently scheduled for April 1st 2020.