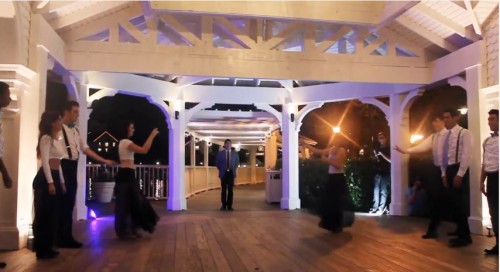 A recent flash mob marriage proposal at Disney’s Boardwalk is starting to get some national attention for its romantic flair. Gavin Hatch, who does the photo finds column for Orlando Attractions Magazine, thought he was going out to Disney’s Boardwalk for a drink with a friend, but after about an hour, he ran into another friend who had a special message for him. Let’s let the video take it from there:

Congratulations to Patrick and Gavin! What a beautiful way to get engaged.

That flash mob actually took 4 months to plan and choreograph. 16 dancers performed during the engagement and the music for the dance was “Unconditionally” by Katy Perry and “Aeon” by Nick Murray ft. Juliet Lyons. The proposal itself happened at Seabreeze Point Gazebo, which is often used for weddings.

What is the most romantic place you’ve discovered at Walt Disney World?