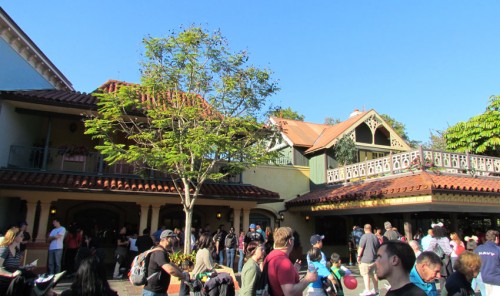 The rumors of a new restaurant opening in the old Adventureland Veranda have been going on for half a decade (if not longer). It hosted the occasional quick service test, was remodeled to host character meet and greets, including most recently Tinker Bell and her fairy friends, and the occasional party. But what if it was going to be returned to service as a restaurant? That would help answer the demand for more dining in the Magic Kingdom.

The key fact to know is that it shares a wall with Liberty Tree Tavern and therefore, with some creative remodeling, a kitchen. This will allow it to improve its capacity and upgrade its offerings. It’s believed the new restaurant will serve quick service lunch and sit-down dinner, much like Be Our Guest does in New Fantasyland.

There have been growing signs that Disney was serious about reopening the location. Lots of exterior remodeling has been going on lately and a recent swap of Sunshine Tree Terrance and Aloha Isle will move the long lines for Dole Whip away from the new restaurant entrance.

The final piece of the puzzle appears to have fallen into place over on the WDWNT blog. The location will have a jungle cruise name and theme. If the rumor is to be believed, “Skipper’s Cantina” will have a backstory related to the Jungle Cruise’s skippers looking to open a restaurant to make a little money on the side.

There’s no official announcement from Disney on a theme, or even that they’re reopening the location. But it’s believed the location will open in time for the Christmas crowds later this year.