Author George R. Stewart and his influence on Walt Disney 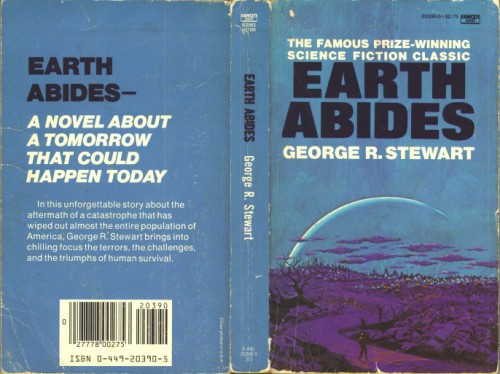 Way back in my teenage years, I discovered a book on my stepfather’s book shelf that had a lasting impact on me, even to this day. That book is “Earth Abides” by George R. Stewart. It is set in a post-apocalypse world after a mystery illness wipes out nearly everyone on the planet. The survivors have to band together to salvage what they can out of their new reality.

Stewart had a great respect for nature and the way it can turn on you suddenly. He also wrote about man’s place in opposition to nature. I re-read Earth Abides every other year or so and it always inspires me. But I never knew that there was a connection between it and my love of Disney until I discovered a recent blog post.

Author and blogger Donald M. Scott has written quite a bit about Stewart and his books. He recently wrote a post regarding how Walt Disney and Stewart came to know each other and work together. Scott has generously allowed me to republish a bit of his article here

World War II was hard on the Disney studios. Pinocchio and Fantasia lost money due to the loss of the European market. Disney also turned over most of the studio’s facilities to the production of training films for the military, who did not pay the studio very well. And after a bitter strike, the studio became a union shop with increased salaries for the animators.

After the war, Disney scrambled to find new types of films that would bring in the kinds of money returned by Snow White and the Mickey Mouse cartoons. He thought there would be a huge market for civilian educational films, modeled on his war training films. Disney also believed that movies based on Americana themes would be popular, since the country was tired of war and would be looking for reassuringly sentimental films.

Impressed by Stewart, he invited him to the studio for a short time. He asked Stewart to prepare suggestions for educational films. He also wanted to hear Stewart’s recommendations for films based on Americana.

Stewart went to the studio, talked with animators and producers, and wrote up his ideas for Disney Producer Ben Sharpsteen. Although there’s no record (outside of Disney Archives) for Stewart’s recommendations about educational films, there is a record of his Americana thinking. He suggested a series of animated movies about American folklore; and that it begin on the East Coast with early tales, moving west and forward in time as the series progressed.

Before he left, Stewart had a fine lunch with Walt Disney. After he returned home, Disney sent him a personal letter: “The type of work you are doing is of much interest to us,” he wrote, “and I hope when you do have the time you will visit us again.” Stewart never returned to the Studio. But Disney did make a series of cartoons and films based on American folklore or fiction that is folkloric in nature – Song of the South, Johnny Appleseed, The Legend of Sleepy Hollow. Carl Carmer is credited as the main consultant for the films, so Stewart’s influence was probably minor.

Yet, if Stewart was not the primary influence on Disney’s Americana films, he had influence. The True-Life Adventure Series and the Americana films at least show that the two men had similar ways of thinking. But Disney’s greatest compliment to Stewart and his work came a decade later.

Learn more about Stewards influence on Walt Disney, including the animated short based on a Stewart novel, in the full article on Scott’s blog.