Marvel’s Agents of SHIELD “Who We Really Are” Recap 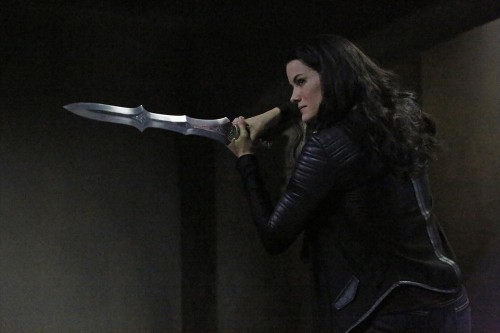 This weeks episode did a great job of relieving some of the dark tone that the season has taken while still moving the overall story forward. We start by seeing Lady Sif, the Asgardian Warrior, wash up on shore with no memory. She doesn’t know who she is or why she is on Midgard; conveniently though, she does remember everything that she was taught as a child which will come in handy later. S.H.I.E.L.D. is called in and the team fly down to help. Sif is trying to find someone named “Kava” but when they figure out that the person their looking for is a Kree she realizes that “Kava” is not a person but the Kree word for “key.”

They find the place where Whitehall discovered the Diviner and capture the Kree, whose name is Vin-Tak. Vin-Tak is able to restore Sif’s memories with the same weapon he used to take them and they all have a heated discussion back at S.H.I.E.L.D. Apparently, the Teregensis was created by the Kree for the purpose of creating new soliders to fight in their war. It was largely a failure, except on Earth. Vin-Tak recently saw that one of the Dinviners was activated and has come to destroy it and the person who was changed.

The team assumes that he’s just talking about Raina, but the conversation got Skye worked up enough that she causes another small earthquake, revealing her change to everyone. Sif wants to take her back to Asgard where she will be safe and so will everyone else and Vin-Tak wants to destroy her. May tries to hide Skye and give her an impromptu lesson in controlling her emotions, but Sif finds them and Skye ends up taking May’s Icer and knocking herself out with it. Bobbi fights Vin-Tak and ends up using his memory weapon against him. Skye’s self-sacrifice convinces Sif to leave them alone for now and she takes the Kree back instead. 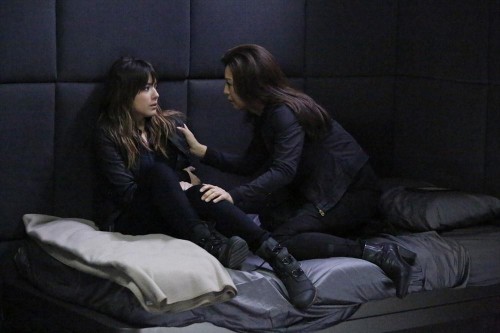 The rest of the team (everyone except Coulson and May) begin arguing about what should be done with Skye and are mad at Fitz for hiding the truth from them. Fitz, however, is the only one that understands being changed in such a way that everyone looks at you differently and he just wanted to protect Skye from that

The sub-plot in the episode is the growing tension between Mack and Bobbi. Mack is concerned that Bobbi getting too close to Hunter and that Hunter should not be brought in on whatever it is they’re planning. Bobbi tries to give Hunter the cold shoulder but Hunter ends up confronting Mack about it. He pushes too hard and Mack has to knock him unconscious. This doesn’t bode well for Mack and Bobbi or Hunter.

It would seem that they want to take down S.H.I.E.L.D. because of what Hydra did to the organization but I don’t think that’s their only motivation. I’ll be interested to see how this plays out. I’m also glad that they didn’t drag out Skye and Fitz hiding her new powers.

What did you think of the return of Lady Sif this week?