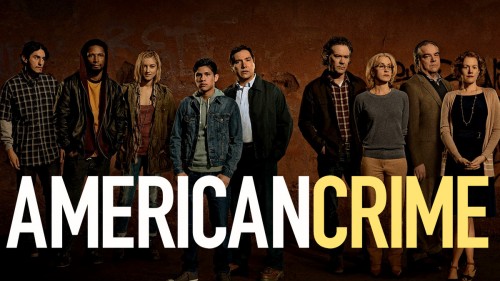 American Crime, the new drama toted to be created by John Ridley, the Oscar winning screenwriter of 12 Years A Slave, is a bold and highly rewarding step for ABC original programming. Filmed in a breathtakingly new and provocative style for the network, the show revolves around the murder of Matt Skokie, the son of Barb (Felicity Huffman) and Russ (Timothy Hutton).

The show takes a deep dive into race in America, a topic the has becomes more timely by the minute. Matt is white, and after the police make some quick judgments, all of their suspects are minorities (two Latino men and an African-American man, the latter having an interesting subplot of his own). This “couldn’t have come at a better time show” does not shy away from taking hot-button issues and laying them out (pay attention to a scene of one of the suspects in a hospital bed).

The acting, across the board, is exceptional, with Felicity Huffman’s complete 180 from her previous ABC work, Desperate Housewives, being rather striking and excellent. Benito Martinez is wonderful as one of the suspect’s father and Timothy Hutton has a quick and heartbreaking scene in a bathroom within the first five minutes of the show. Having just seen the pilot, I’m excited to see Regina King, who reoccurs as the newly Muslim sister to one of the suspects.

The show fills the Thursday at 10pm slot, taking over for How To Get Away With Murder, and receiving the Scandal lead-in, aka the best time slot on ABC right now, so the network shows that it is incredibly confident in the show and what it has to say.

The show is dark. This is no Shonda Rhimes program, adding in bits of humor throughout and juicy love triangles (even though AC does have a blatant Coach product placement and the hilariousness that while a gang leader is bagging up weed, he plays Revenge in the background), this show is pure drama with no breaks. You are in it for the hour and you are NOT allowed to leave.

I’m interested to see what reaction it gets by the public. Will this become the new Empire, even though the FOX juggernaut is much more soapy? I truly hope so, because American Crime is bringing up conversations that not only have never been discussed on network television, but ones that need to be discussed immediately.

I have only seen the pilot, but in those 45 minutes, I have a multitude of questions (especially after that cliffhanger) and am excited to see where the show takes me.