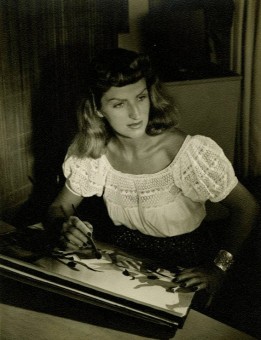 Mary Blair was an artist, illustrator, and designer whose career spanned many media over the course of five decades. Disney fans know her for her color styling and art direction for Cinderella (1950), Alice in Wonderland (1951), and Peter Pan (1953), as well as serving as creative lead for theme park attraction it’s a small world. I’m also a fan of the mosaic murals she did for the Disney Parks.

Disney fans will now be able to tap into the spirit and vintage style of Mary Blair thanks to a new line of clothing from Pinup Girl Clothing. The Magic of Mary Blair collection by Pinup Couture features 1950s and 60s-style dresses and skirts that showcase illustrations from artist Mary Blair.

You will note Blair’s whimsical use of bold graphics, juxtaposition of complementary and contrasting colors, and a look that never really goes out of style. 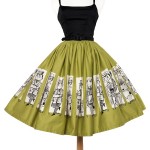 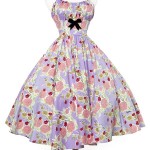 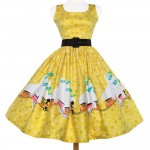 The collection will consist of a dozen dresses and eight skirts, with all of these designs available in extra small to 4X. The collection incorporates Blair’s whimsical novelty motifs of travel–such as trains, planes, and caricatures of commuters–and girlish flair like umbrellas, butterflies, kittens, lips, and roses. Some of the art included was previously used in the 1950s for handkerchiefs and scarves manufactured for Carol Stanley Studios, New York. The collection will also showcase one of Blair’s personal artworks depicting a mother embracing her child. These designs will be incorporated as all-over and border prints on classic Pinup Couture designs, including the flirty and famed 1960s-style Jenny Dress which features adjustable straps and a gathered full skirt, the stunning 1950s-style Heidi Dress, which showcases a sweetheart neckline, covered belt, and flattering swing skirt, and the sleek and sexy Evangeline Dress, a fitted, wiggle-style style making its debut in this collection.

“This collection is a dream come true for Pinup Girl Clothing,” muses the company’s Creative Director and Assistant Designer, Micheline Pitt, who employed her own artistic talents in bringing Blair’s designs to life. “I started my career in animation–frequently the only woman in room–and Mary is my idol. She accomplished so much, refused to be overlooked in a male-dominated world, and stands out as inspiration for all graphic designers, illustrators, innovators, and dreamers today.”

“The Mary Blair Family Estate is thrilled to be associated with this exciting project,” said Blair’s nieces, Jeanne Chamberlain and Maggie Richardson. “Fashion played an important role in Mary’s life–her ‘look’ often taking center stage as she entered a room. She would be so proud to know that the magical designs she created so many decades ago have become timeless, multi-generational, and universally loved. And, she would have delighted in working alongside the dynamic and uniquely creative feminine energy that is Pinup Girl Clothing. This new collection not only captures Mary Blair’s art beautifully and boldly, as Mary painted it, but it also captures the whimsical spirit behind the art…that makes us all smile.”