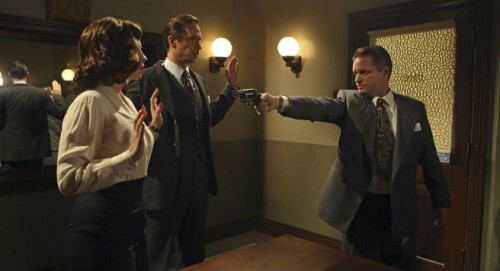 This week’s episode starts right where last week’s left off, with Peggy in the custody of the S.S.R. and under interrogation. Sousa, Dooley and Thomson take turns trying to make her confess to, among other things, killing agent Krzemenski. Jarvis then shows up with a signed confession from Howard Stark, telling them that he will come in for questioning only if Peggy is released.

As Peggy is packing up her things from her desk, Jarvis confesses that that he forged the document, which upsets Peggy. On their way to fix the problem, Jarvis and Peggy catch Dr, Ivchenko taping out Morse code on the window sill. Peggy is then prompted to go back to the interrogation room to confess what she’s done in the hopes that they will believe her when she tells them about Dr. Ivchenko. Sousa trusts her and convinces Dooley to send him and Thomson across the street to find Dottie

Ivchenko uses the time alone with Dooley to hypnotize him into revealing where Stark’s tech is being held and helping him find the specific item that the doctor is looking for. Ivchenko leaves the S.S.R. and escapes with Dottie, but not before he tells Dooley to put on one of Stark’s new pieces of armor. The agents find Dooley still hypnotized in his office, but they manage to wake him. Unfortunately, there is no way for them to deactivate the vest. Chief Dooley decides that the best thing he can do is steal Thomson’s gun, shoot out a window and jump out before the vest explodes.

The episode ends with Dottie arriving at a movie theater and hiding the stolen piece of tech. She turns it on before leaving and gas begins to seep out of it, causing everyone in the theater to begin lashing out at each other. Shortly after, an usher arrives with a couple who was running late for the movie and discovers everyone in the theater has dies.

Quite the downer to end the episode on, but next week’s finale heralds the return of Howard Stark and promises a few more twists before it’s all over.

What have you thought of the series so far?