A few more details on the 2015 edition of Star Wars weekends have been shared on the Disney Parks blog. Above you can see the main artwork for this year’s event was released. 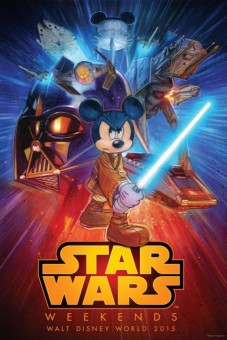 Looks good, and I like seeing the Earful Tower featured.

Of course no big news, such as major names on the guest celebrity list or a heads up for a major announcement on themepark expansion, leaked today. We’re also awaiting news on what merchandise will be available and some other details.

But we did learn that:

Star Wars Weekends runs Friday-Sunday from May 15 – Jun 14, 2015. Are you planning to attend in 2015? Will you try one of the Star Wars character dining experiences?