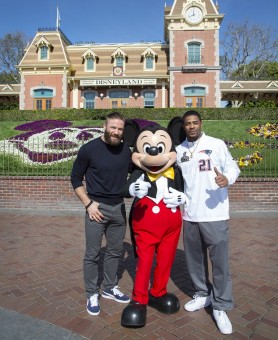 (February 2, 2015) New England Patriots players Julian Edelman (left) and Malcolm Butler were greeted by Mickey Mouse as they celebrated their teamÕs Super Bowl XLIX championship victory with a special visit to Disneyland park in Anaheim, Calif., on Monday. In the frenzied moments following their teamÕs feat of capturing the National Football League championship on Sunday, Edelman and Butler stood in front of a TV camera and shouted four words that have become an iconic reaction to milestone achievement: ÒWeÕre going to Disneyland!Ó (Paul Hiffmeyer/Disneyland)