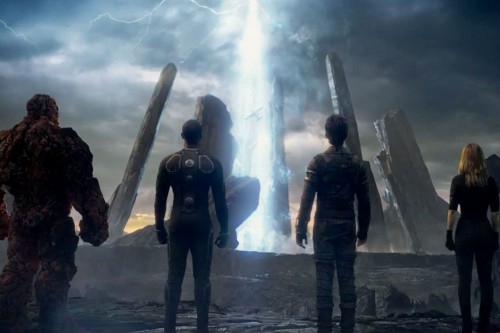 Disney may have bought Marvel studios, but unfortunately it was too late to land the rights to some of Marvel’s biggest properties. Those comics were licensed to other studios, who had previous deals with Marvel. There’s hope that some of these will eventually come back to Disney, but in general, the deals favor the other studios, as long as they continue to make movies using the comic book super heroes.

That explains why 20th Century Fox is rebooting the Fantastic Four series with a new cast and new backstory. Fox also owns the rights to the X-Men in movies. Marvel co-producers, but Fox will distribute.

There was a lot of buzz about the new the teaser trailer which you can watch here. .

This movie is inspired from Ultimate Fantastic Four, which re-envisions the team, sort of the next generation. Since it’s a teaser you really only get a feel for the character costumes and design. We’ve learned that Ben Grimm/The Thing will be mostly motion capture CGI instead of a costume (and no pants). So that’s already an improvement.

The movie has cast the quartet of Miles Teller (Reed Richards/Mr. Fantastic), Kate Mara (Sue Storm/Invisible Woman), Jamie Bell (Ben Grimm/The Thing), and Michael B. Jordan (Johnny Storm/The Human Torch). As in the 2005 series, the principle villain will be Dr. Doom. But you’ll have to wait for another trailer to see him.

Do you think Disney should try to reacquire the rights to the Fantastic Four and X-men from 20th Century Fox?