Update: The drone owner has decided to take down his channel after receiving a lot of blow-back. 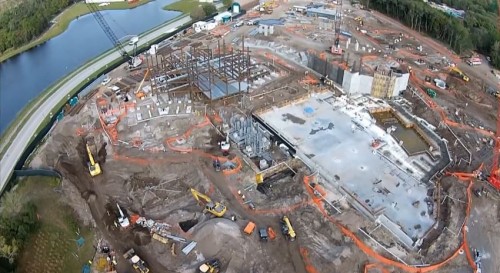 A YouTube channel called Your Flying Camera has added a drone flyover of the Avatar – World of Pandora expansion at Disney’s Animal Kingdom. In it you can clearly see that vertical construction has begun on one of the two main rides, as well as the giant cliff/wall that will hide the show buildings from the main guest portion of the land.

If you look at the image above, the the large cement slab with what looks like a pool is expected to eventually house the indoor/outdoor boat attraction that will take you into the bio-luminescent night-time world of the planet Pandora. The build at the top of the image will house four theaters with motion platforms that will take you flying over the planet. If you look close in the upper right you can see some of the foundations that have been laid to hold the giant ‘floating rocks’ that the concept art made famous.

It’s great to get this footage, but I don’t recommend you do this with your drone. I’m sure Disney frowns on this, for both worker safety and secrecy reasons. But that said, you’re not seeing much more here than you would in a helicopter fly-by and a good long range lens. So I am happy to share the video with you. With all of the Avatar construction taking place well-away from guest areas, aerial photography is about the only way we can get updates on the project.

What are your expectations for when Avatar opens at Disney’s Animal Kingdom? Do you think it will be a game changer for the park and Walt Disney World?

previousStan Lee to cameo in Marvel’s Agent Carter
nextBreaking down the Avengers: Age of Ultron Trailer