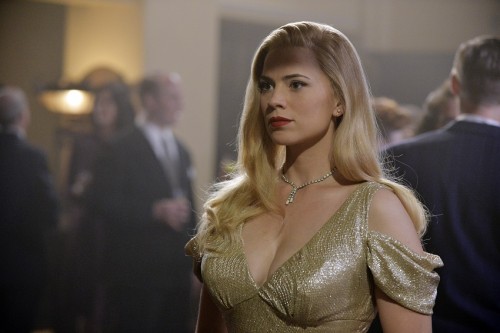 After helping Captain America defeat the Red Skull in WWII, what do you do next? That’s the question that Peggy Carter is wrestling with as we meet her again, one year after the events of the first Captain America movie.

She works for the Strategic Scientific Reserve, (think S.H.I.E.L.D. before there was a S.H.I.E.L.D.), but, because she’s a woman, her fellow co-workers treat her more like a secretary than an agent.

News breaks that Howard Stark has been accused of selling his inventions (especially the dangerous ones) on the black market and has become a traitor to the United States.

Stark finds Carter that night to plead his innocence and ask for her help to clear his name. As he sails off into the harbor, Carter meets Edwin Jarvis, Stark’s butler and her new ally. They hit it off swimmingly:

“You’re new to espionage aren’t you?”
“Far from it. Last summer, I caught the cook pocketing the good spoons.”

Before he leaves, Stark tells Carter of a chemical formula that he’s created for molecular nitrate that she needs to get her hands on before the bad guys do.

What follows is a classic spy tale with disguises and cool gadgets as Carter plays double agent, trying to work both for and against the S.S.R. I’ve heard a few people compare the show to Alias and I would have to agree. The things I loved about Alias, I also love about Agent Carter. The end of the first episode would lead us to believe that Peggy isn’t the only one playing both sides. 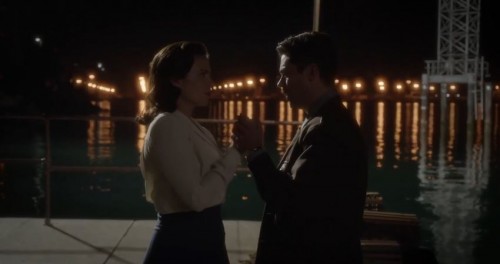 The second episode has Carter continuing to search for the mysterious Leviathan and what it’s connection with Stark’s formula and Roxxon oil is. But the heart of this episode is the personal life of Carter. She is looking for a new place to live and wrestling with the thought that everyone she gets close to ends us dead (a classic superhero motif).

My favorite part of the episode is the Captain America radio show that plays in the background of various scenes. In the show, Peggy has been recast as the damsel in distress, which distresses the real Peggy. I love the moments though, where the show that is being played in the background is in direct contrast to the action in the foreground, like when Betty Carver (Peggy’s character on the show) is being kidnapped by the villains while, in reality, Peggy Carter is winning her fight against the bad guy.

I had a lot of fun watching the premiere, what about you?