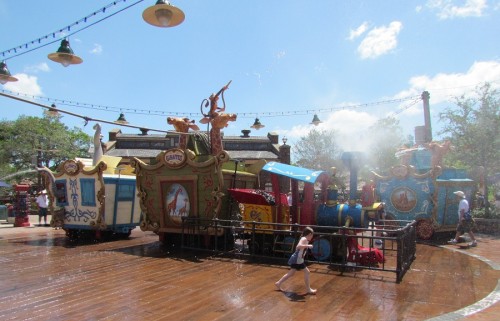 Over 20,000 bricks were sold as part of the “Walk Around The World” promotion that started in 1994 and ended in 2000. Bricks were only promised to be maintained for 10 years and we’re now five years past that date. Most of the pathways are now showing their age. A lot of bricks have been removed leaving an ugly patch work of new and worn bricks around the Magic Kingdom and TTC area. It’s time to pack the bricks away and put in some beautiful new pathways. 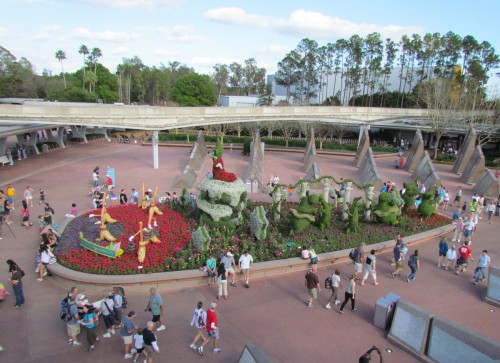 The “Leave a Legacy” program at EPCOT filled the void left by the end of the “Walk Around The World” bricks program. Visitors to EPCOT purchased a small plaque with their image or a quote which was placed on a series of marble pillars at the entrance to EPCOT.

As time goes on these pillars resemble a cemetery or memorial of some sort. That’s definitely not the spirit of EPCOT. Ditch the tombstones and bring back a beautiful garden and fountain lined path (bring in those jumping fountains from the Imagination pavilion to add some lightheartedness too).

Speaking of jumping fountains, it’s time to close the curtain on the Imagination Pavilion at EPCOT. It’s a pale shadow of its former self, large areas are blocked off and the movie is definitely vintage-aged. Dreamfinder and Figment can find a home in the remodeled “Wonders of Life” pavilion once the new attraction based on Pixar’s Inside Out opens in the former “Cranium Command” location. Then use the Imagination pavilion space for a new adventure.

Face it, the road-side attraction themed Chester and Hester’s Dino-Rama has never quite fit in with Walt Disney Imagineering’s usual stellar level of theming, the best of which is on display throughout the rest of Disney’s Animal Kingdom. Instead we get off-the-shelf attractions with the lightest theme imaginable and carnival games. It’s exactly the sort of atmosphere Walt Disney was reacting against when he built Disneyland.

Those are my suggestions for closings. I hope Disney is listening.

With Disney in the closing mood, what would you like to see them get rid of next?