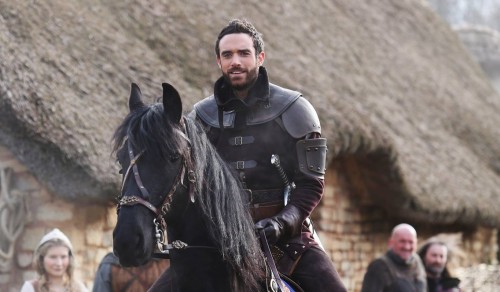 I wish I had more good things to say about ABC’s medieval Musical Comedy special Galavant, but I’m going to be frank with you… it was bad, often verging on awful. The best parts were the commercials for ABC’s comedies sung to the tune of the Galavant theme song. That should tell you something.

Galavant is the creation of three talented artists. Dan Fogelmen, Alan Menken, and Glenn Salter. Unfortunately, this is not their best work. I will be honest, the musical numbers did grow on me upon the second viewing. But there are not enough of them and one of them, a very odd training sequence (a la Rocky films) was totally out of place.

The first half-hour pilot spends a lot of time doing ‘backstory’ (yes, they use that term in the show) and the plot doesn’t really get rolling until the first regular episode. TL;DR, Galavant is a dashing hero who drank himself to the gutter after losing his lady love Madalena to the evil King Richard. He gets a chance to redeem himself and sets off on a quest.

The story hinges on a couple of interesting plot twists and the appearance of guest stars. John Stamos’ rival knight at the joust was well conceived. But the comedy potential never quite pays off in the final joust that is played at pedestrian speed.

There was too much Timothy Omundson as the King. Not that I mind the actor, but the character of the King was easily established as a mean oppressive doofus and they should have left it at that. We did like the squire character, he had some great lines, but was under utilized. Galavant himself played his part too straight, we could have used a wink at the audience or two to let us know he was in on the joke.

A lot of the comedy was too risque for an 8PM show. 10PM maybe. Cable OK. In addition to some adult humor that wasn’t appropriate for my 11 year old, they actually bleeped a few words during the show. I don’t understand why they couldn’t remove the words they had to bleep while writing the script. It’s not like this was originally going to end up on HBO, it was written with ABC in mind.

I’m happy Disney is willing to experiment with comedy musicals during prime time. As a fan of musical comedy, I hope they continue trying new things. I think this one need some more help in the comedy writing department.