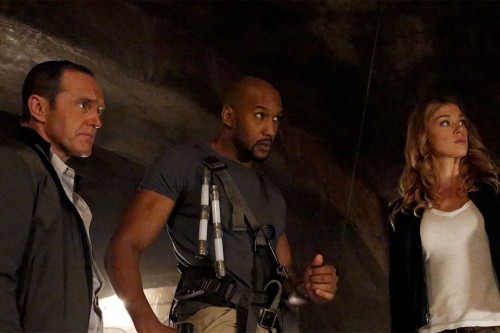 With next week being the Winter Finale of Agents of S.H.I.E.L.D., things are quickly coming to a head.

This week, the team has found the location of the hidden city: San Juan. But, before they can go, Hydra swoops in to attempt kidnapping Raina so the team splits up. May, Skye and Hunter fly to Vancouver to help two of the Koenig brothers (I’m still convinced they’re Life Model Decoys) rescue the Girl in the Flower Dress. Once they’re back on the bus, Raina tells Skye, among other things, that the Kree are the blue aliens that have come to Earth, that she and Skye are, in fact, human (possibly “in-human”) not aliens and that she believes they are two of the “worthy ones” able enter the temple in the hidden city without getting hurt. Inconveniently, as she tells Skye this, the other team (Coulson, Fitz, Simmons, Bobbi and Mack) have found the entrance to the city and are sending Mack in to investigate. Of course, things don’t go well. Mack touches a pattern on the floor and once he returns to the surface, proceeds to attack the rest of the team until he is knocked back down the shaft. And that’s where we leave that half of the team.

The half still on the bus are caught and boarded by Hydra led by Ward to take Raina and Skye. In the pre-credits scene, Whitehall is surprised by Ward taking Skye hostage, meaning Ward did it on his own volition, not under orders. In fact, his orders were to destroy the plane after he got Raina, which he also didn’t do, much to Whitehall’s chagrin. The episode ends with Agent 33 (who still looks like May) giving the order to take the plane down.

Also, as a new bit of mystery, at one point, Mack asks Bobbi if she’s told Hunter about “the other thing.” I suspect we’ll have to wait until after the break to find out what “the other thing” is.

Maybe we’ll find out in episode 10 of this season. Here’s a preview from Marvel:

Overall, I have really enjoyed this season, though it has ventured into much darker waters. I would like to see more of the building back up of S.H.I.E.L.D.: finding new recruits, trying to convince the world that they aren’t a terrorist organization, etc… but I am still enjoying watching the mystery of the writings unfold.

Where would you like to see Agents of S.H.I.E.L.D. go after the break?