We’re just a few days away from the official shipping date of Guardians of the Galaxy DVD/Blu-Ray. Marvel’s been slow-dripping previews of some of the special features. My favorite is this “Dance Off” from the bloopers section of the Blu-Ray.

You can still pre-order Guardians of the Galaxy on Blu-Ray or DVD for delivery on December 9th. Order today and save up to 50%!

Since Marvel’s big announcement of their Phase 3 line up, news has been scarce, though lately, it’s picking back up.

On the big screen, Frank Grillo, who played Brock Rumlow a.k.a. Crossbones in Captain America: Winter Soldier recently teased his appearance in the next Captain America movie.

“Winter Soldier was only a taste of what’s to come with the next film, and I couldn’t be more humbled and excited,” Grillo said. “They just kind of called and said, ‘What kind of shape are you in? We’re going to need a body scan.’ They scan your body so that whatever you wear fits you like a glove…. We all know what Crossbones represents in his world, so when they called me and said we gotta do the body scan, I was like ‘Okay!’”

In case you don’t know what Crossbones represents in this world: in the comics, he assassinated Captain America at the end of Marvel’s Civil War and since that happens to be the subtitle of the next Cap film, I think we’re starting to see what direction it might go. 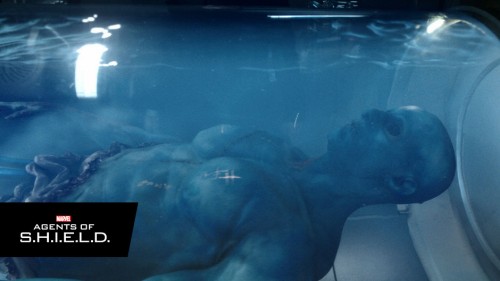 Next week, we get a new episode of Agents of S.H.I.E.L.D. and with it, the end of the mystery of the alien writings. S.H.I.E.L.D. discovers the ancient city before Hydra, but uncovering the secrets may require one of Coulson’s team to make the ultimate sacrifice. Meanwhile, May and Skye race to get to Raina before Whitehall takes her.

Marvel revealed the identity of the mysterious blue alien in the Guest House on Agents of S.H.I.E.L.D. but I’ll just link to the article so you won’t be spoiled if you don’t want to.

Last week Marvel released a new promo for Agent Carter. Get a hint at Peggy Carter’s average day working at the “phone company” with a new preview for “Marvel’s Agent Carter,” premiering Tuesday, January 6 on ABC!

This show looks like its going to be a lot of fun.