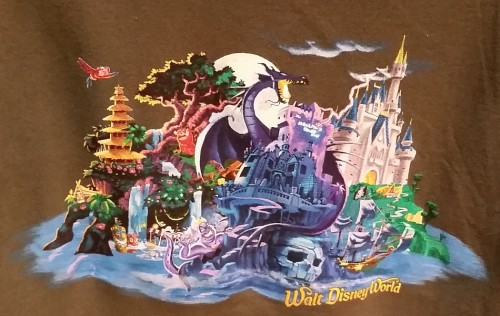 The off-season is not usually a time when we see a lot of new t-shirt patterns appearin in stores at Walt Disney World, but there are two exceptions to that this time. First, it’s the holiday season and boy do we have some doozey’s of a shirt to share with you. And second, the Sorcerer’s Hat icon is being removed from Disney’s Hollywood Studios, so they’ll need new merchandise reflecting that change.

Let’s look at the new Walt Disney World shirts without the Sorcerer’s Hat on them first. 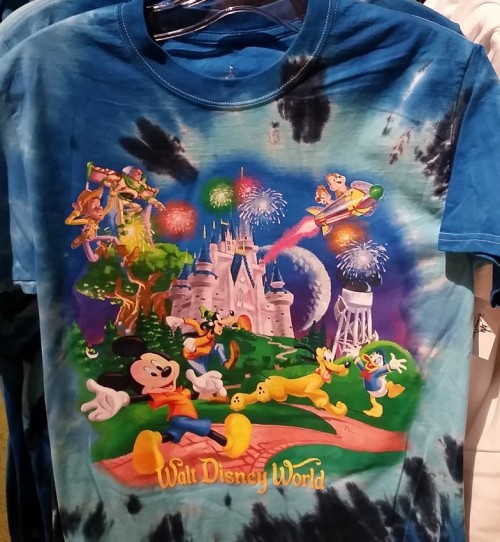 It’s great to see the EARful tower back on merchandise so soon. My speculation is that these are actually old designs that Disney rushed back into production. There’s no reason for Iago to be over the Tiki Room if it wasn’t under new management (top). And the Tie-dye pattern evokes one of Walt Disney World’s posters from the 25th anniversary. The reason there are no Sorcerer Mickey ears, is because they didn’t exist when these designs were first made.

There are four of the most fashionable “faux Christmas Sweaters” T-shirts You’ve ever laid your eyes on now for sale at Downtown Disney’s World of Disney and online at the Disney Store’s Authentic Parks Merchandise Section. 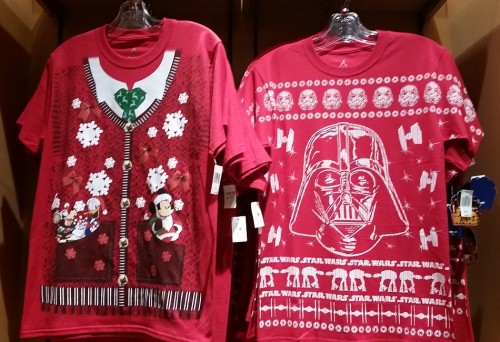 Santa Mickey has a sackful of gifts as he and his friends deliver a smile and some whimsy with this novel tee. The screen art design gives the appearance of a knitted cardigan vest, with jingle bell buttons, and undershirt with tie.

The pattern that takes the cake is this Star Wars themed Darth Vader Herringbone Stitch Tee (right). You’ll be the hit of every Christmas party with this. It’s no wonder Darth Vader looks intimidating as the Dark Lord gets the needle on this Star Wars tee. The screen art design features stormtroopers, TIE fighters, and At-Ats printed to appear as if crafted with a herringbone stitch. 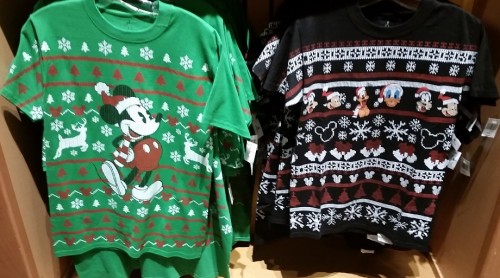 Then these two are more ‘traditional’ Christmas sweaters. The black Santa Mickey Mouse and Friends Cross Stitch Tee is a hoot. Mickey, Goofy, Donald, and Pluto get in the holiday spirit as they all don their Santa hats on this festive tee. The screen art design is printed to appear as if crafted with cross stitching for that wintry woolen look.

While the green Santa Mickey Mouse Herringbone Stitch Tee. Santa Mickey has the holidays all sewn up as he stands out on this festive tee. The screen art design features wintry symbols printed to appear as if crafted with a herringbone stitch.

You can find a castle full of Holiday goods and treats at the Disney Store’s special holiday section. Your purchase through these links helps The Disney Blog. Thank you