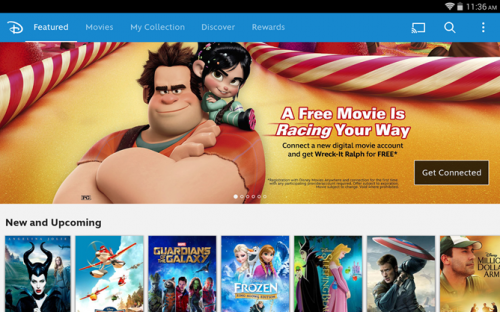 I will admit that I have not quite gotten on board the whole “watch movies on a mobile device” thing. It might be because I’m old and I remember when TVs were in black and white and when you had to drive to the video store to rent a Beta tape to watch at home on your Betamax. Heck, my computer screen is larger than the TV I had for 10 years during high school and college. So the idea of watching a movie on a smaller screen than that, just doesn’t appeal to me. I want scope and detail you just can’t get on a tablet of mobile phone.

That said, I realize, I’m probably in the minority. What’s better, Disney realizes it too. They’ve finally completed the behind the scenes deals required to get their digital copy movie library online for Google Android users.

The new partnership between Google and Walt Disney Studios will allow millions of U.S. Android users to enjoy Disney, Pixar, and Marvel movies from their digital collection across their devices using Disney Movies Anywhere.

Even better, for a limited time, new users can receive a free digital copy of Disney’s “Wreck-It Ralph” when they sign up and connect their account with participating Google Play retailer accounts.

“We are very excited to announce Google Play as our newest partner for Disney Movies Anywhere,” said Janice Marinelli, President, Disney Studio In-Home and Digital Distribution & Disney-ABC Content Distribution. “We set out to create an exceptional Disney experience that made owning digital movies easy and fun, and with Google Play now on board following our successful launch in February, we are able to deliver unprecedented availability and ease for consumers across a broad range of mobile devices.”

“We want to make it easy for movie fans to enjoy all of their past and future digital purchases across all of their devices. Our partnership with Disney now gives Google Play users the ability to conveniently watch all of their Disney, Marvel and Pixar digital movies that have been purchased from any Disney Movies Anywhere participating retailer,” said Jonathan Zepp, head of Google Play Movies partnerships.